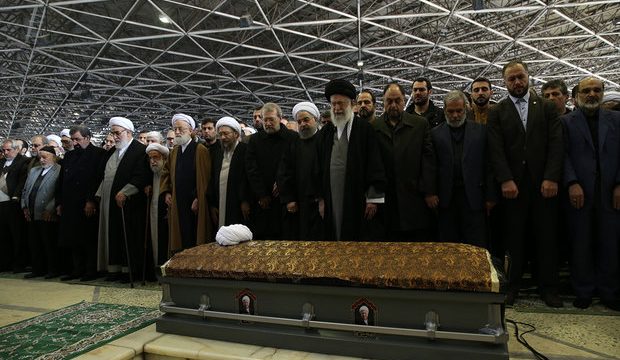 Washington Post|Amir Hossein Mahdavi: The recent death of Iran’s former president Hashemi Rafsanjani has triggered fears that Iran’s reformist camp has also been fatally wounded. Many are concerned that without Rafsanjani’s imposing presence, current President Hassan Rouhani will be overpowered by the conservative religious establishment and a controlling IRGC. However, Rouhani may in fact emerge stronger from Rafsanjani’s death.

Rafsanjani — along with Supreme Leader Ayatollah Khamenei — was one of the last remaining founders of the Islamic Republic in 1979. His last position as head of the expediency discernment council did not give him much executive power. But his presence in key roles over 38 years of the Islamic Republic  made him one of the few symbols of stability in the Iranian political context.

In his last years, Rafsanjani retained strong ties to dignified Shiite clerical figures and the Shiite Seminary. That strong bond protected him from Mahmoud Ahmadinejad, the conservative former president, and from other radical forces who wanted him out. Rafsanjani initially was a principal supporter of Ayatollah Khamenei — and helped ensure his selection as Iran’s supreme leader — but their relationship gradually soured.

Following Rafsanjani’s defeat in the 2005 elections, he was sidelined: He was no longer Tehran’s Friday imam, and two of his children were convicted in closed-court proceedings and imprisoned for fraud and political charges. The supreme leader never cut off Rafsanjani completely, however. And among the people who had access to Ayatollah Khamenei, Rafsanjani was the only moderate figure who expressed supported free trade and ties with the West.

Rafsanjani protected Hassan Rouhani and paved the way for Rouhani to succeed him as president. Rouhani was Rafsanjani’s deputy from the beginning of the Iran-Iraq War in the 1980s, continuing to 2013, when  Rouhani won the presidential elections. Rouhani replacedRafsanjani in the election after Rafsanjani was disqualified by the Guardian Council. In the years that followed Rouhani’s election, Rafsanjani openly supported his government through several controversies, including the nuclear deal and the 2016 parliamentary elections. Many felt Rafsanjani articulated what Rouhani could not publicly say.

Given the sensitivity of the supreme leader to the government’s involvement in partisan politics, the house arrest of Green Movement leaders, and the stringent limitations imposed on the reformist former president Mohammad Khatami, it fell to Rafsanjani to take on the role of leading the reformist movement. Under his guidance, reformist candidates won a majority in parliament in the March 2016 election.

Now that Rafsanjani has died, Rouhani has no choice but to undertake the leadership of the reformist movement himself. Most post mortems have suggested that everything is now harder for Rouhani — just five months from the presidential election in June. Having lost his mentor, he now faces the hard-liners on his own.

Should Rouhani be defeated in the next elections and a radical government formed, it could negatively affect the long-term future of Iran. Under such conditions, Rafsanjani’s death would be bad news for the conservative clergy, as well as for moderates and reformists in general. Notwithstanding its unwanted consequences, however, this important event could also present reformists with opportunities.

Adopting a role to lead reformists outside the government is admittedly not a role Rouhani would likely choose under his own volition, given that his previous positions — second-in-command during the Iran-Iraq War and secretary of the Supreme National Security Council — reflect his inclination toward managing security and defense affairs and away from engaging in partisan reformist actions. But the death of Rafsanjani brings Rouhani’s interests and those of civil society into a closer alignment.

While before, Rouhani’s role was as a proxy for Rafsanjani, now the possibility of him simultaneously leading both the administration and the reformist masses is buoyed. These new circumstances require that Rouhani take more explicit positions, articulate his supporters’ demands for political and cultural freedom and reduce the interference of militants in political affairs.

Rouhani’s actions now will determine how his evolving political role will shift. Rouhani’s direct cooperation with reformist grass-roots factions  effectively makes him a proxy for reformers, as the only one to echo demands for reform to the circles of power. Undoubtedly, this will attract criticism, including from the supreme leader and those in unelected positions of power. Nevertheless, this role could also transform Rouhani into a political leader acceptable to a wide range of supporters of modernization and development, both within Iranian society and among foreign observers.

To protect himself against powers opposed to him, Rouhani will also especially need support from the West, which made economic demands in relation to the nuclear deal. Rouhani may be building his ambitions as he considers running for a second term in 2017, yet his complex political situation may also ultimately make him a threat to the implementation of any succession plan.

The continuous suppression since 2009 — of both political leaders, parties and the reformist movement’s supporters — present Rouhani with a well-timed bid at a reelection campaign. Considering Rouhani’s membership in the assembly of experts in 1989 — when then-President Ayatollah Khamenei was chosen as the next supreme leader (the only incidence of leader substitution in the history of the Islamic Republic) — Rouhani has great potential to be proposed as a candidate for the leadership position himself if his public support is sustained.

The sudden death of Rafsanjani eliminated a moderate pillar of the Islamic Republic, but it did not put an end to the possibility of replacing it. Everything depends on how Rouhani plays his cards in the near future — and on the support he gets from the grass roots during his encounters with radicals.