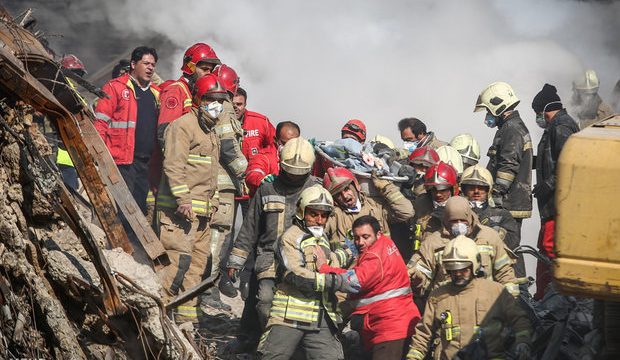 A few minutes ago, Maleki announced that the two bodies, belonging to martyred firefighters, were discovered on the northwest side of Plasco building which caught fire and collapsed last Thursday.

The official also noted that the debris removal process was 85 per cent through expressing hope that the mission will be accomplished soon.

“The highest temperature is present in the northwest part of the building where the fire broke out early into the disastrous incident and later spread,” underlined the official stressing that search for bodies of martyrs was still underway.

As the ruins removal process reaches final steps, excavators and mechanical equipment pull out a layer of molten iron from the rubble. The volume of molten metal underneath the debris goes beyond imagination and hopes of finding bodies of martyred firefighters and ordinary citizens are dimming on a moment to moment basis. Nevertheless, the rescue team has announced that chances exist for more bodies to be discovered in northwestern wing.

Including the two newly-found bodies, so far bodies of four firefighters and four civilians have been recovered from the building’s debris. Overall, deaths of nine people have been approved since one firefighter also passed away after being taken to hospital on the first day of the bitter incident.

Tehran Provincial Office of Legal Medicine Organization, in a statement, has reported that authentication of six dead bodies, including three firefighters and three ordinary citizens, has been completed. Meanwhile, the Fire Department spoeksman has been quoted as saying that identity of one of the bodies discovered today could be done by his ID assets with him.

Police Commander had rejected reports that the force had arrested individuals which could have started the blaze in Pasco intentionally.
A Firefighting Department official has told reporters on Wednesday that funeral ceremony of the killed firefighters during collapse had been postponed for another date.

Two recoverd bodies have been identified as Hossein Soltani and Hamed Havaei.

One more body of firefighters was uncovered.

The number of bodies recovered on Wednesday from Palsco rubble rises to 6, authories said.