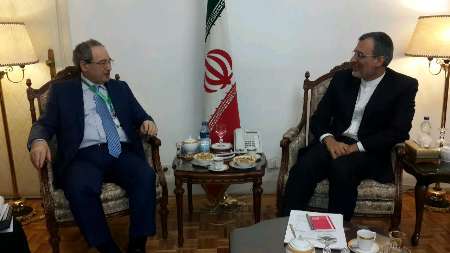 IRNA – Iranian and Syrian deputy foreign ministers in a meeting in Tehran on Tuesday exchanged views on the latest developments related to the upcoming Astana meeting on Syria.

The Syrian-Syrian talks with the aim of preparing the preliminaries for resolving the Syrian political crisis.

Earlier on Tuesday, Syrian Prime Minister Imad Khamis said that Iran and Syria are in similar front against terrorism and other countries should follow them in that regard.

Khamis made the remarks in a joint press conference with Iranian First Vice- President, Eshaq Jahangiri, at Saadabad Cultural Complex.

The Syrian prime minister underlined necessity of continuation of consultations between Syrian and Iranian officials and said, ‘In fact, Iran and Syria are in similar front against terrorism and all other countries should follow them in this regard.’

He expressed condolences over departure of Ayatollah Akbar Hashemi Rafsanjani.

The official said, ‘We need to appreciate Iran’s great role in fighting terrorism and supporting the Syrian people and government in all political, military and economic spheres.’

He called his talks with Iranian officials ‘constructive’ and underlined continuation of exchange of delegations between the two states.

Khamis referred to the historical and remarkable relations between Iran and Syria during Imam Khomeini and Hafez al-Assad leadership and said, ‘Today, Iranian Leader Ayatollah Seyyed Ali Khamenei and President Hassan Rouhani as well as Syrian President Bashar al-Assad are following the past policy.’

Syrian premier voiced hope for boost of relations between the two countries and said, ‘We owe our victories to Islamic Republic’s unsparing support and we hope for more victories in various fields in the future through promotion of mutual cooperation.’

‘The current war in Syria ruined the country and the victories achieved are the result of Syrian people’s resistance and the Syrian Army’s sacrifices in the past six years,’ the official added.

He pointed to the special role of Iran in the region and world and said, ‘Syria is ready to develop ties with Iran in various economic and political fields.’

The cooperation documents would facilitate Iranian investors’ presence in Syria to have closer cooperation in reconstruction of the country and its industry, he noted.

A number of Syrian top-ranking officials, including petroleum and mineral resources minister, industry minister, communications and technology minister and head of the country’s central bank accompany Khamis in his visit to Tehran.