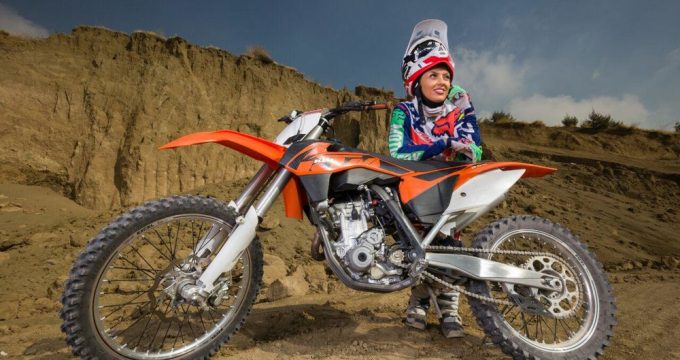 Tehran Times- Up at the crack of dawn Baran Hadizadeh starts her day of motocross practice, a routine she goes for three times a week.

Motocross is a form of off-road motorcycle racing held on enclosed off-road circuits.

Taking her heavyweight motorbike in tow, she drives to the racing track in Hashtgerd, outskirt of Tehran, to live her dream, one day at a time.

Getting her hands greasy is never a concern, when she goes down on her knees to put her motorbike chain back on and lubricate it.

At the dusty track she puts her helmet on and brraaap, turns on her bike and determined she goes to perform her routine. After a mile or so she faces the very first challenge of the track, jumping over a dirt hill.

Committed to the jump, within 6 feet from the hurdle, she lifts the front wheel of her bike and flies into the air, while everyone holds their breath, and oof! She lands safely on the bike two wheels on the ground. Thank God for that!

A highly skilled rider now, Baran is among the first generation of female motocross racer in Iran and an inspiration to many Iranian girls today.

The 30-year-old woman from Isfahan, southern Iran, has set the bar a bit higher for Iranian women to get involved in a primarily male dominated sport, the motorcycle racing.

Although she doesn’t have an ID from Motorcycle and Automobile Federation of the Islamic Republic of Iran (MAFIRI), since riding motorbikes have remained illegal for women on the streets, she continues to ride her bike on tracks.

Just recently, MAFIRI has allowed Iranian women access to the standard motocross track at the Azadi Sports Complex in Tehran, an issue that was in dispute for years.

“Dreams don’t come true easy. They take a lot of sweat and perseverance.

The day she came across a motocross bike race on TV, she knew her life has turned a new page.

“For a year and a half, without missing a beat, I went to motorbike racing tracks to watch men’s race.”

Having taken the road less traveled, it took Baran five years of dedication and hard work to be where she is today.

The physically demanding sport has her hit the gym three to four days a week to work on various muscle groups as a professional bike rider, not mention that she has to keep a healthy, nutritious and high protein diet.

Baran says breaking a sweat is nothing new to her since she has always had a hand in just about every sport that she could poke her nose in, from playing volleyball in her high school team, to basketball, swimming, karate, serious hiking like climbing Mont Damavand to now professional bike riding.

But she admits none of the sports was as exciting as riding a motorbike. “All my sorrow is left behind once I get on my bike.”

Despite having broken a few bones in body like her nose and hurting other parts like her knees and shoulder blades in her practices, she admits that at the end of the day it is all worth it.

“Dreams don’t come true easy. They take a lot of sweat and perseverance.”

She thrives on moving audience by her joyful, exuberant moments of riding her bike. “You see, I was there once where they are today.”

Her next goal is to become an exceptional instructor for Iranian women interested in motocross racing. She also wishes to become a globetrotter on her motorbike.

Although Baran has competed in a few national motocross races for women, she is yet to participate at an international racing event, hopefully, in Iran.