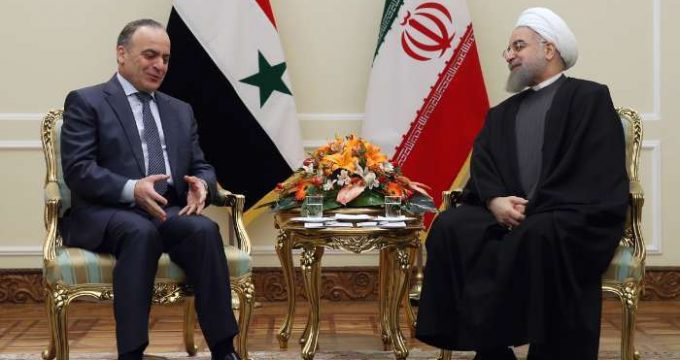 MNA– Iranian President Hassan Rouhani said liberation of Aleppo and establishment of ceasefire were two important steps toward the restoration of peace and stability in Syria.

President Hassan Rouhani made the remark in meeting with Syrian Prime Minister Imad Khamis in Tehran on Wednesday, expressing hope that the upcoming Astana meeting would be a good start for real, unhindered negotiations between the Syrian sides and its result would lead to desirable conditions for Syrian people.

“Aleppo liberation conveyed this message to the world that the Syrian people are fully capable of defending their land against terrorists, and the terrorist groups and their sponsors will never succeed in reaching their goals,” President Rouhani said.

Rouhani further reiterated Iran’s support for the Syrian nation, and went on to add that the region would have been led into a perilous and uncertain path if the terrorists and their backers had had the upper hand.

Imad Khamis, for his part, deemed the victory in Aleppo the result of resistance and sacrifices made on the part of the Syrian army and generous support from the Islamic Republic of Iran.

Khamis stressed that Syria welcomes any solutions and initiatives for returning peace and stability to the country as well as for a positive conclusion to the Syrian-Syrian talks, expressing hope that the Astana talks would result in a solution to restore security to Syria and bring about a sincere fight against terrorists.

The Syrian Prime Minister held in high regard Iran’s role on creating peace and stability in the region, and highlighted the need for developing and cementing strategic ties between the two countries in all areas.

Khamis further called for the activation of Iran-Syria joint cooperation commission and the participation of Iran’s private sector in various projects in Syria.

The Astana talks are slated for January 23 and 24 in the Kazakh capital city.