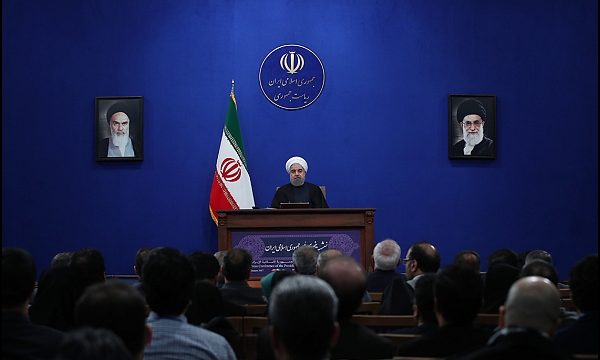 Press TV- Iranian President Hassan Rouhani says the historic deal over Iran’s nuclear program and its implementation belied the claims against the country and demonstrated the honesty and sincerity of the Islamic Republic.

Prior to the signing of the nuclear deal, Iran had repeatedly asserted that it is not after the development of weapons of mass destruction and its nuclear program is exclusively for peaceful purposes, the Iranian president said, adding that the agreement proved Iran’s honesty and showed that what had been claimed against the Islamic Republic was merely baseless allegations and lies.

Describing the JCPOA as “a great national achievement,” Rouhani stressed that all of the nuclear-related sanctions against the Islamic Republic have been removed, adding that there are no more bans in the gas, oil and transport sector.

He added that, however, the US, given its hostility against the Islamic Republic, has been creating obstacles in the banking transactions between Tehran and the rest of the world.

The Iranian president said Iran is witnessing a 7.4-percent economic growth, exceeding his pledge of five percent for the year.

Rouhani hailed the creation of some 700,000 jobs this year in Iran, saying that there were only six countries that had managed to create 600,000 job this year.

Rouhani made the remarks in a press conference attended by some 200 Iranian and foreign reporters in Tehran on Tuesday on the first anniversary of the implementation of a nuclear agreement, known as the Joint Comprehensive Plan of Action (JCPOA), reached between Iran and the P5+1 group of countries.

Iran and the five permanent members of the United Nations Security Council – the United States, France, Britain, Russia and China plus Germany signed the JCPOA on July 14, 2015 and started implementing it on January 16, 2016.

Under the JCPOA, which was implemented on January 16, 2016, Iran undertook to put limitations on its nuclear program in exchange for the removal of nuclear-related sanctions imposed against Tehran.

Since the implementation of the JCPOA, the International Atomic Energy Agency (IAEA) has confirmed Iran’s compliance to its obligations under the nuclear agreement in several reports.

In his visit to Tehran on December 18, the IAEA Director General Yukiya Amano expressed satisfaction with Iran’s compliance with its commitments.

#IranDeal, Hassan Rouhani press conference, JCPOA January 17, 2017
Iran’s Zarif due in Switzerland, Malaysia soon
The Iran nuclear deal is a success – and the whole world is safer for it