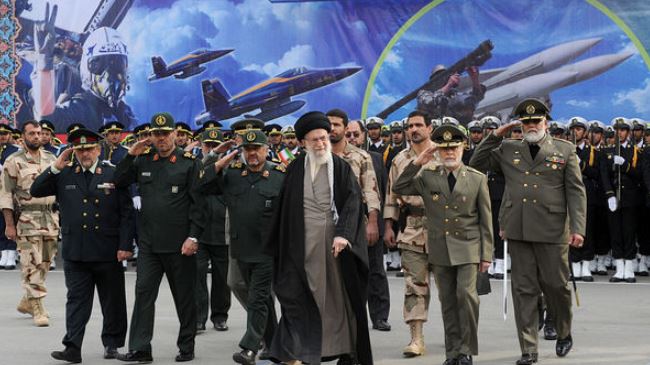 Iran Review|Kayhan Barzegar- Masoud Rezaei: Historically, Iran’s survival has been attributed to its geopolitical and geo-economic position and in competition with the great powers. But, since the advent of the 1979 Islamic Revolution, such an atmosphere and mentality has changed substantially, and consequently, some former allies, like the U.S. and Israel, become enemies.

Washington’s support, as well as other Western and Arab countries’ multilateral support of Saddam(1) during the eight years of war waged against Iran was the most important events that has led Iran to require its political decision makers to obtain adequate military capabilities, and to take action for gaining national military might in order to prevent other adversaries from invading Iran once more. As a result of that, Iranian leaders’ intense doubt toward the U.S. and the West directly stems from their experiences of the Iran-Iraq War.(2) Indeed, for many Iranians, the eight-year war with Iraq was a war of “all against Iran,” a true manifestation of Iran’s strategic loneliness.

Hence, in order to protect itself, Iran has focused on consistent awareness, by increasing national military capabilities and preparing for the worst as one of its greatest tools. In this respect, the U.S. invasion to Afghanistan in 2001 created new insecurity in the region. Two years later, George W. Bush and the neoconservatives invaded Iraq. However, it was not simply to overthrow Saddam Hussein, the Iraqi dictator, but rather was an attempt to pave the way for demolishing Iran’s system, and to gradually provide necessary conditions to do so.

Therefore, theoretically, it is not possible to practice idea of territorial defense at the cost of preserving ideological values, attitude and to counteract threats, as well as to understand precisely the defensive thought of the country except through identifying Ayatollah Khamenei’s mental perception and exploring his strategic foreign policy and national security thoughts. It is important because according to Constitution of Islamic Republic of Iran, the Supreme Leader is the Commander-in-Chief of the Armed Forces.(3) Although Iran has a complicated political system and grants some independence to the president, particularly in domestic affairs, his ability in directing political change or making changes in the security policy of foreign affairs in contrast to the leader’s preference is, at most, trivial.

It is significantly important here to propose this issue that after the Iran nuclear deal, more commonly known as the JCPOA,(4) two different perspectives about Tehran’s security-military policies have been interpreted in the West, particularly in the U.S. On the one hand, some believe that Iran may gradually change its strategic doctrine in its interaction with the West,(5) and on the other, others believe that Iran’s post-nuclear deal strategy will still be an offensive doctrine in the region, and the world.(6) Such confusing positions among official military and academic circles in the West generally originate from two basic issues. First, in Iran, “White Paper” is not published officially and publicly, so it is not possible to explore how and to what extent actions, extent of threats and security risks of the country is performed based on such a document. Second, it is partly related to information gap and lack of accurate knowledge about the structure of decision-making in strategic domain of the country, where the Supreme Leader plays a determining role.

More importantly is the fact that in Iran Ayatollah Khamenei’s meetings with military forces, i.e. all armed forces, are emphasized as meeting with “chief commander of armed forces.”  This means that when the Leader discusses military, security and defensive matters during his speeches, his statements, whether stated explicitly or implicitly, are immediately considered as new strategic and military instructions for all military branches and centers. Therefore, since Ayatollah Khamenei, unlike many executive officials in different countries, explicitly states his policy and strategy in foreign relations and there is not inconsistency between Iran’s declared policies and practiced policies, our analysis in this article will be based on conceptual and referential recognition of the Supreme Leader’s views on defensive and military domains through which we can understand the regional strategy of Islamic Republic of Iran.

Iran’s Security Dilemma
Some believe that changes during the recent years in the Middle East, and around the world, have given Iran a uniquely advantageous strategic situation in a way that during the past 200 years of political history, Iran hasn’t had such a position of power in the region and or the world.(7) But the fact is that recent events have made Iran face more new threats than opportunities, and Tehran’s inability to deal with such threats will be hazardous for Iran’s security and territorial integrity. Such arguments, therefore, should be proposed very carefully. This starting point for such an evaluation begins by examining present threats and identifying Iran’s regional strategy.

* These views represent those of the author and are not necessarily Iran Review’s viewpoints.