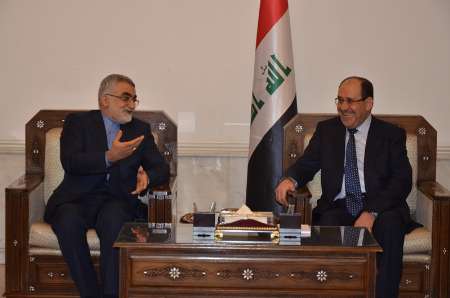 IRNA – Senior Iranian Member of Parliament, Alaeddin Boroujerdi, and Iraqi Vice-President, Nouri al-Maliki, in Baghdad on Monday discussed the latest developments in the region, particularly those in Iraq and Syria.

During the meeting, Boroujerdi, the head of Majlis National Security and Foreign Policy Commission, presented an invitation letter of Majlis Speaker Ali Larijani for al-Maliki to attend a conference on supporting Palestinian Intifada, due to be held in Tehran in the near future.

Speaking to reporters, the Iranian lawmaker said he had congratulated the Iraqi government and nation on the recent victories of the Iraqi Army in Mosul liberation operation, expressing hope that the country will witness final victory with the full defeat of Daesh terrorists in the near future.