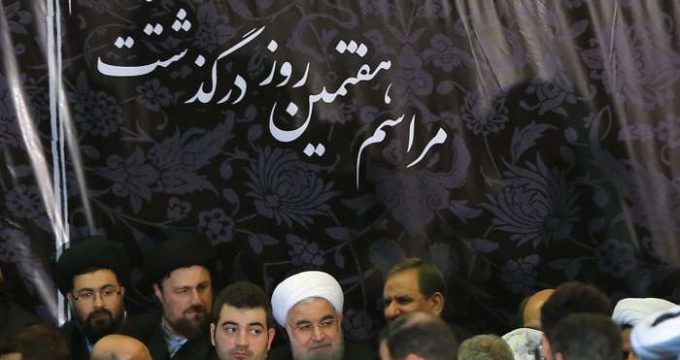 IRNA – The commemoration service for the late Chairman of Iran’s Expediency Council, Ayatollah Akbar Hashemi Rafsanjani, was held on his tomb in southern Tehran on Sunday.

The 7th day service was attended by Iranian people from all walks of life as well as a large number of Iranian officials.

Addressing the mourning participants, the Expediency Council member, Hojjatoleslam Ali-Akbar Nateq-Nouri, said patience was one of the main characteristics of the late Ayatollah Rafsanjani.

‘Sometimes I was really wondering how he (Ayatollah Rafsanjani) entered the Expediency Council on a Saturday morning in a calm manner and with a smiling face, despite all the pressures, problems, unkind behaviors and accusations,’ Nateq Nouri said.

He said that it’s not good to insult valuable figures while they are alive and regret when they pass away.

Ayatollah Rafsanjani was not an opposition leader, rather he was a pillar of the Islamic Revolution, he added.