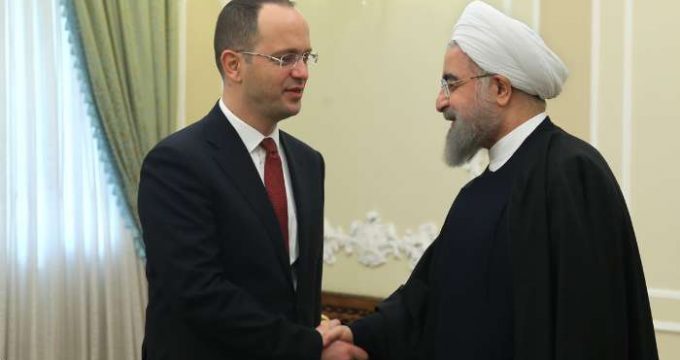 President Rouhani: Iran ready to cooperate with Albania in counter-terrorism

Tasnim– Iranian President Hassan Rouhani warned against the spread of terrorism across the globe and said the Islamic Republic is ready to boost cooperation with various countries, including Albania, in the campaign against terror groups.

“Terrorism is a global scourge and one of our major duties is to combat violence and terrorism in particular,” President Rouhani said in a meeting with Albanian Foreign Minister Ditmir Bushati in Tehran on Sunday.

He further said Iran has always favored peace and stability in the Balkans, adding that Tehran is ready to cooperate with different countries, including Albania, in combatting terrorism.

The president also pointed to the capabilities and potentials of the two countries to boost cooperation in economic areas, saying after the July 2015 nuclear deal between Iran and world powers, opportunities have been provided for developing and deepening ties between Tehran and Tirana in all fields especially in economy and trade.

The Albanian top diplomat, for his part, said Tirana is determined to open a new chapter in the history of relations with Tehran.

Bushati stressed the need to fight against violence and said all countries should act in unison in counter-terrorism and Albania is ready to increase consultations with Iran in this field.

Enthusiasm among the Balkan States for ties with Iran has grown after implementation of the Joint Comprehensive Plan of Action (JCPOA), a nuclear agreement between Iran and the Group 5+1 (Russia, China, the US, Britain, France and Germany).

In October 2016, in a meeting with Albania’s new accredited ambassador to Tehran, President Rouhani highlighted the importance that his administration attaches to closer ties with the Balkan States.

“Promotion of cooperation with the Balkan States, including Albania, has been always important for us,” the president said.