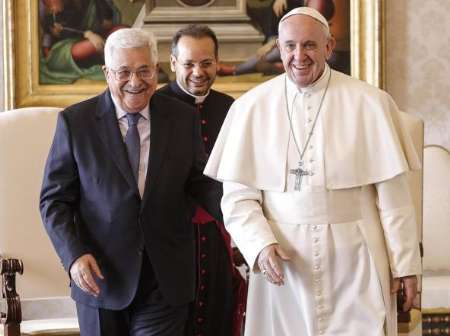 Press TV- Palestinian President Mahmoud Abbas and Pope Francis have discussed the probable relocation of US embassy from Tel Aviv to Jerusalem al-Quds.

US President-elect Donald Trump has repeatedly said during his campaign that if elected, he would not hesitate to relocate the embassy from Tel Aviv to Jerusalem al-Quds, which is regarded by Palestinians as their future capital. The controversial decision has evoked Palestinians’ bitter opposition.

“We are waiting to see if it happens. If it does, it will not help peace and we hope it does not happen,” said Abbas while addressing reporters outside the Vatican gates following a meeting with the pope

During his trip, Abbas also stopped in Rome to open the new embassy of the State of Palestine in the Vatican, which he said was “a sign that the pope loves the people of Palestine and loves peace.”

The Vatican has unconditionally recognized a Palestinian state for years but made it official in 2015 by signing a treaty with the State of Palestine.

In an interview with France’s Le Figaro newspaper on Saturday, Abbas said he had penned a letter to Trump in which he had warned of the danger of relocating the embassy.

“Not only would it strip the United States of all its legitimacy to play a role in resolving the conflict, but it would reduce to nothing a two-state solution,” he said.

Abbas added that the Palestinian Authority was discussing “several options” with other Arab countries to respond to the potential relocation of the US embassy. Dropping recognition of Israel was one measure being contemplated, he said, expressing hope, however, that “we will be able to work with the next American administration.”

Earlier in the month, Abbas warned that “any statement or position that disrupts or changes the status of Jerusalem al-Quds is a red line which we will never accept.”

The Palestine Liberation Organization (PLO) has already warned the US against moving its embassy to Jerusalem al-Quds, saying all American embassies in the Arab world would have to close in the face of popular Arab outrage that would follow such an action.

On Tuesday, US Republican Senators Ted Cruz, Marco Rubio, and Dean Heller introduced the so-called Jerusalem Embassy and Recognition Act after being sworn into the 115th Congress in Washington.

Similar moves by Republican majorities over the past two decades have been unsuccessful, but this time they are supported by the president-elect.

In September, Trump, who was the Republican presidential front-runner at the time, promised Israeli Prime Minister Benjamin Netanyahu that he would recognize Jerusalem al-Quds as Israel’s undivided capital if he emerged triumphant in the US presidential election.