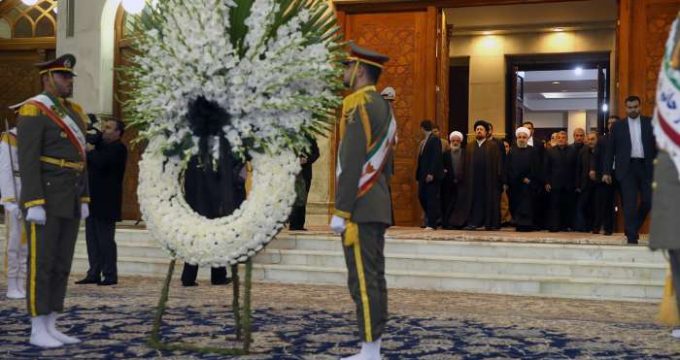 IRNA – President Hassan Rouhani attended the mausoleum of the late Imam Khomeini in southern Tehran Friday morning to pay tribute to the Founder of the Islamic Republic Imam Khomeini and the late Chairman of Expediency Council Ayatollah Akbar Hashemi Rafsanjani.

A number of the Iranian officials as well as the late Ayatollah Rafsanjani’s family members accompanied President Rouhani in the ceremony.

A memorial ceremony will also be held at the mausoleum of the late Imam Khomeini on Sunday to commemorate the late Ayatollah Rafsanjani’s memories seven days after dis departure.

Ayatollah Rafsanjani passed away on January 8 (Sunday) at the age of 82 due to a heart attack in a Tehran hospital.