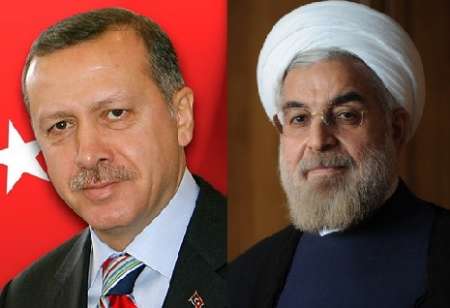 IRNA – Turkey’s President Recep Tayyip Erdogan extended his condolences on the demise of the Expediency Council Chief Ayatollah Akabr Hashemi Rafsanjani to his Iranian counterpart President Hassan Rouhani over the phone on Thursday.

During the conversation, President Rouhani appreciated the sympathy offered by the Turkish government and nation and said that the late Rafsanjani always underlined expansion and consolidation of friendly ties between Iran and its neighbors, especially Turkey.

He also offered his condolences to the Turkish President on the death of a number of Turkish citizens in terrorist attacks and expressed hope that by cooperation between the two governments terrorism could be uprooted, so that people of the region may feel more tranquility.

He said Tehran is pleased with the closer cooperation among Ankara, Moscow and Tehran for establishment of peace in the region.

He expressed pleasure over the ceasefire in Syria and said all should try to safeguard and continue it.

President Rouhani further expressed his confidence that close cooperation among Tehran, Moscow and Ankara will be very important in creating peace and stability in the region.

Referring to upcoming negotiations in Astana, capital of Kazakhstan, on Syria, the Iranian President said ‘we are all determined to fight all terrorist groups in the region.’

He also expressed hope that cooperation between Iran and Turkey could result in a relative stability in Syria.

President Erdogan said that the passing away of Ayatollah Rafsanjani was a great sorrow for his national and government as they regarded him as a great statesman and politician, who endeavored for peace, stability and tranquility of the region and creation of firm ties between Tehran and Ankara.

He underlined his country’s intention to develop cooperation with Iran in all fields and added that consolidated relations between the two states could be immensely effective in settlement of regional problems.

Iran and Turkey have a great responsibility in the region, so they should strengthen their mutual cooperation to reduce regional tensions, he added.