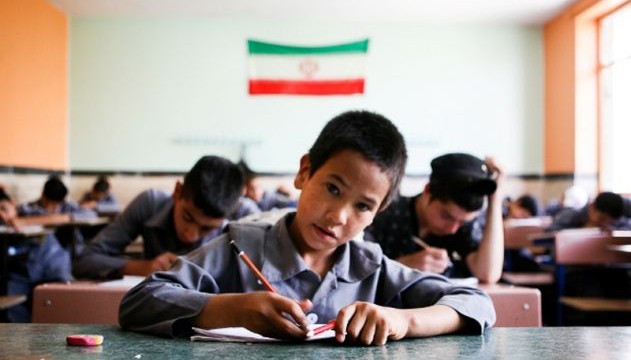 January 12, The Iran Project – Following a decree by leader of Islamic Revolution Ayatollah Seyed Ali Khamenei that all Afghan children in Iran should be permitted schooling regardless of their residency status, Head of the Literacy Movement Organization has announced that the literacy rate of foreign nationals has grown by 60 percent since the beginning of the Islamic Revolution.

Referring to the responsibility of the Literacy Movement Organization to educate individuals aged from 10 to 49 years old, Ali Bagherzadeh said on Wednesday that last year 23.800 foreign nationals and this year 19.700 individuals aged below 20 were educated.

He said 700 thousand foreign nationals have already been educated, adding that this year, 18.600 individuals enrolled in the literacy program.

Stressing the free education of foreign nationals in Iran, he stated that Iranian government, the United Nations High Commissioner for Refugees (UNHCR), and Norway government respectively provide 80, 18, and 2 percent of the literacy costs.

The Islamic Republic of Iran generously hosts one of the largest and most protracted refugee situations in the world, said Sivanka Dhanapala, United Nations High Commissioner for Refugees (UNHCR) Representative in Iran.

In regards to Education and Health in particular, over the past two years Iran has been exemplary in the initiatives it has taken towards increasing refugees’ access to these services during their stay in Iran,” Sivanka Dhanapala noted.

In May 2015, Iran’s Supreme Leader Ayatollah Ali Khamenei issued a decree to the Ministry of Education allowing all Afghan children of school age, regardless of documentation status, to attend primary and secondary school education, resulting in over 350,000 Afghan and Iraqi children being enrolled in the 2015-2016 school year. In addition, all refugees of school-age are now exempt from paying costly refugee-specific tuition fees (USD $70-90 per child), which encourages even vulnerable and economically challenged families to send their children to school.