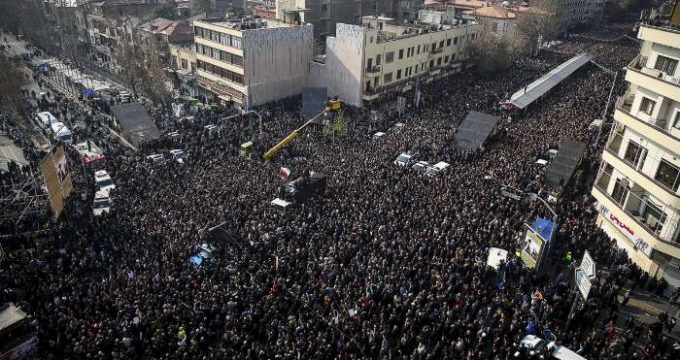 January 12, The Iran Project 12 – Ocean of mourners, high-ranking officials and a large number of people from all walks of life escorted body of the late Chairman of the Expediency Council Ayatollah Akbar Hashemi Rafsanjan, a symbol of unity among various political groups, in the Iranian capital on Jan 9, 2017.

A large number of Iranian officials and top figures from various political groups took part in the funeral ceremony for the late ayatollah in an indication proving that they will carry on his path even after his departure.

The sudden demise of Ayatollah Hashemi Rafsanjani has echoed across the major global media with almost all of them praising the man and covering the high turnout of the Iranian people who had come to see off the late Ayatollah.

In the wake of Ayatollah Rafsanjani’s death on Sunday as a result of a heart attack at a Tehran hospital, German media also joined the ranks of their international peers to praise the key role he played during the victory of the 1979 Islamic Revolution in Iran.

Architect of the Revolution

German weekly Der Spiegel described Rafsanjani as an architect of the Revolution and a pragmatic leader who as the head of the Expediency Council played the role of a mediator between the Iranian Parliament and the Guardian Council to settle the issues.

ُThe New York Times reported that the Iranians bade farewell to Ayatollah Hashemi Rafsanjani and adding there were so many people — 2.5 million by official estimates — that many of the dignitaries and family members invited to Tehran University.

Guardian described late Rafsanjani as a founding member of the revolution, a former de-facto commander-in-chief of the Iranian military during the Iran-Iraq war, and a two-time president seen as the country’s second-most powerful political figure for much of the Islamic republic’s history.

German newspaper the Frankfurter Allgemeine Zeitung was also among media in the European nation that covered the news on Rafsanjani’s death, writing that there were many ups and downs in his political life.

CNN also reported that the news of the sudden passing of Ayatollah Hashemi Rafsanjani has utterly shocked Iranians of all walks of life.

It is also worth mentioning that the western TV channels including BBC, France 24 and Euronews broadcast live the funeral ceremony of late Ayatollah.

From the outset of the ceremony held in Tehran, the Western channels transmitted live the news about the event.

Additionally, American TV channel of CNN during its reports described Ayatollah Rafsanjani as a ‘political giant.’

Undoubtedly, with the demise of Ayatollah Hashemi Rafsanjani, the Revolution and Islamic establishment have lost one of their most loyal and oldest companions.

It is expected today that his allies and companions continue Ayatollah Rafsnjani’s path follow the right path of late Imam Khomeini.