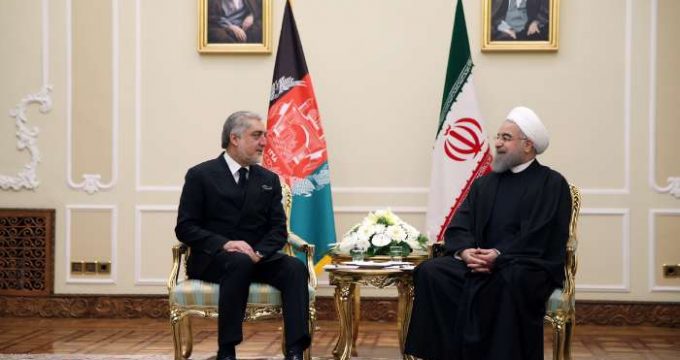 IRNA – President Hassan Rouhani said on Wednesday that the Islamic Republic of Iran will spare no efforts to help Afghan nation and government.

Rouhani hoped that with promotion of political stability and unity in Afghanistan, joint projects will be implemented soon.

Abdullah, heading a delegation, is in Iran to extend condolences on behalf of the Afghan government and nation to Iranian officials and nation on the demise of the late Ayatollah Akbar Hashemi Rafsanjani, the Chairman of the Expediency Council.

While thanking the Afghan guest for the condolence, President Rouhani said the late Ayatollah Rafsanjani was among pillars of Islamic Iran, always dealing with the regional and international issues, including Afghan issue, while striving for promotion of peace and stability in Afghanistan.

He hoped that all will be able to follow the path through joint efforts.

Rouhani asserted, ‘The government of the Islamic Republic of Iran will continue to side Afghan government and nation.’
The president said development of Chabahar port and promotion of the railway networks, including connection of Iran’s railway to Herat, can further expedite Tehran-Kabul cooperation.

He said continuation of terrorism is an intricacy not only to Afghanistan but to the entire world, so it needs to be checked.
Abdullah for his part, extending condolences on behalf of the Afghan National Unity Government and nation on the passing away of the late Ayatollah Rafsanjani, said the Ayatollah has been a distinguished figure for the Afghan people and ‘Our people will never forget his assistance, especially under difficult conditions.’

He also provided a report on domestic conditions and peace talks in Afghanistan and said, ‘Iran has always been a helper to Afghan government and people and our government is determined to expand its ties with the Islamic Republic of Iran, as a friendly and brother country, in all spheres.’