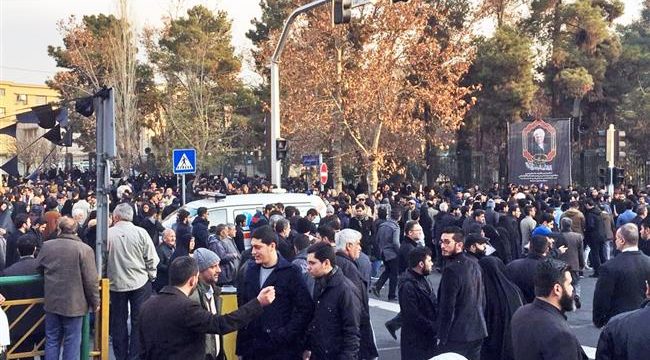 Press TV- Huge crowds of mourners are streaming into the streets of Tehran to pay their final respects to Ayatollah Akbar Hashemi Rafsanjani, a former Iranian president and chairman of the Expediency Council, who is viewed as a pillar of the 1979 Islamic Revolution.

The body of the venerated cleric will be laid to rest at the mausoleum of the late Founder of the Islamic Republic Imam Khomeini on Tuesday morning.

Among other participants are government ministers, lawmakers, military top brass, members of the Expediency Council and the Assembly of Experts as well as a number of foreign ambassadors and dignitaries.

Leader of the Islamic Revolution Ayatollah Seyyed Ali Khamenei is set to perform the funeral prayers at Tehran University. The cortege is then scheduled to depart towards Imam Khomeini’s mausoleum in southern Tehran.

Video footage showed mourners carrying pictures of the late cleric alongside those of Imam Khomeini, Ayatollah Khamenei and President Rouhani.

Ayatollah Rafsanjani was admitted to Shohada Hospital in northern Tehran on Sunday after suffering a heart attack. He passed away later in the day. He was 82.

Iran is observing three days of national mourning in honor of Ayatollah Rafsanjani.

On Monday, a mourning ceremony was held at Jamaran Mosque in Tehran. President Rouhani along with other senior officials attended the funeral.

Rafsanjani helped establish the Combatant Clergy Association in 1977, which proved fatefully instrumental in the victory of the Islamic Revolution two years later.

He became Iran’s first Speaker of Parliament after the Revolution, serving until 1989.

Then, he was elected president, in which position he functioned until 1997.

He was also the chairman of the Expediency Council, a position he kept until his departure.