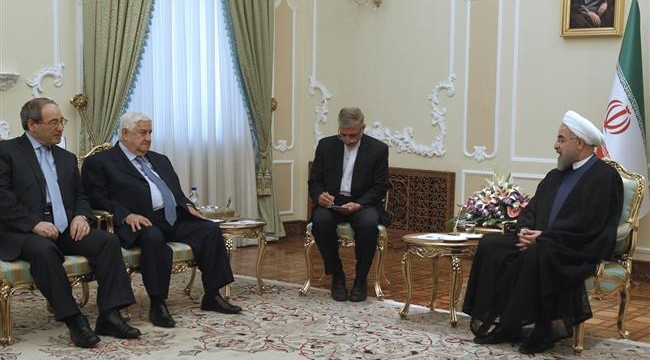 The high-ranking Syrian delegation’s visit to Tehran was aimed to pursue a number of important issues which may include the nationwide ceasefire, a review of the latest security and field developments in Iran and Syria’s cooperation in battle against terrorism, exchange of opinions about joint political initiatives to protect the ceasefire, preparations for a political solution and continued Syrian-Syrian talks, and measures to prevent terrorist groups from boosting morale and operational capabilities after the defeat in Aleppo.

In Tehran, Walid Muallem had three rounds of intensive talk with his Iranian counterpart Mohammad-Javad Zarif to discuss, among other issues, Damascus’ stance regarding a lasting ceasefire, humanitarian aids, the fight against terrorism, and political initiatives proposed in different negotiations.

In his meeting with Iran’s Secretary of the Supreme National Security Council Ali Shamkhani, Muallem was briefed on Iran’s position regarding the nationwide truce and armed groups’ return to negotiations and yielding to ceasefire conditions after field defeats in Aleppo. Rear Admiral Shamkhani also stressed Iran’s position that any political solution or talks that weakens the Syrian establishment’s rule over the country or put part of the country under the control of terrorist groups or occupation of foreign forces is against the interests of the people, a threat to countries in the region, and doomed to fail.

In a meeting with Walid Muallem and his entourage, President Hassan Rouhani also emphasized that the ground is paved both for field operations against the terrorists and for political activities to restore stability and security in Syria, after the victory in Aleppo. He also expressed hope that future efforts to resolve the Syrian crisis and resume peace talks lead to Damascus’ control over the whole country, security for Syrian people, and protection of the country’s territorial integrity.

Given the abovementioned developments, the significance of the recent visit by the Syrian delegation lies in the following points:

Despite rumors of Iran’s marginalization in the major Syria developments, including the truce, which assume greater roles for Russia and Turkey, Iran has played a significant role in the ceasefire, in the face of sensitivity on the part of some countries regarding Iran’s key role in the field and political scene in Syria. Proof is that the ceasefire plan Russia brokered in the UN Security Council closely resembled Iran’s four-article plan for peace in Syria.

The coordination between Iran and Russia has been manifest in Syria developments. Before the Security Council approved the Russian-backed resolution, the Iranian and Russian presidents stressed in a phone conversation that Russia’s diplomatic efforts regarding Syria were undertaken in coordination with Iran.

The recent developments, ranging from the trilateral summit, the liberation of Aleppo to the upcoming summit in Kazakhstan and the UN resolution, all indicate coordination at the macro level among the major players in the Syrian crisis. This demonstrate that the developments in Syria are back on a promising and constructive road, led by Russia and Iran, and more recently Turkey.