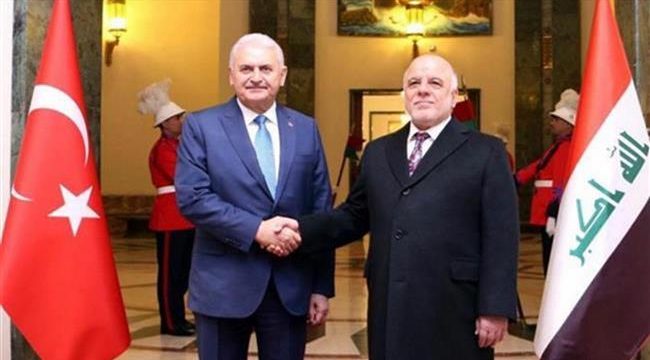 Press TV- Iraqi Prime Minister Haider al-Abadi says his administration has reached an agreement with Turkey over Baghdad’s demand for the withdrawal of Turkish military forces from a camp in the north of Iraq.

Abadi made the announcement on Saturday after he met with visiting Turkish Prime Minister Binali Yildirim in the capital.

The Iraqi state TV, which aired Abadi’s announcement, did not provide further details about the agreement over Turkey’s military presence in the Iraqi town of Bashiqa. Turkey deployed about 500 troops to the facility last year, saying it was wary of potential attacks by the Takfiri Daesh terrorists that are currently based in the city of Mosul, near Bashiqa.

Iraq has repeatedly called on Turkey to withdraw its forces or risk a potential confrontation with the Iraqi military, which is currently battling Daesh in Mosul. Baghdad has also refused Ankara’s call for a contribution to the Mosul liberation operation.

Yildirim arrived in Baghdad on Saturday for a two-day visit, the first since relations between the two neighboring countries began to strain over the Bashiqa dispute.

Turkish Ambassador to Baghdad Faruk Kaymakci expressed hope earlier that the visit could “open a new chapter in Turkey-Iraq relations.”

Sources in Ankara had also speculated that Yildirim’s discussions in Baghdad would include the Bashiqa dispute, the fight against Daesh, and the issue of the Kurdistan Workers’ Party (PKK).

Turkey’s controversial deployment to northern Iraq comes as Ankara continues with its military endeavors in neighboring Syria. The Turkish operation, which began in August, has faced similar criticism from the Syrian government. Turkey says it will continue the push which it says is meant to uproot Daesh and Kurdish militants.