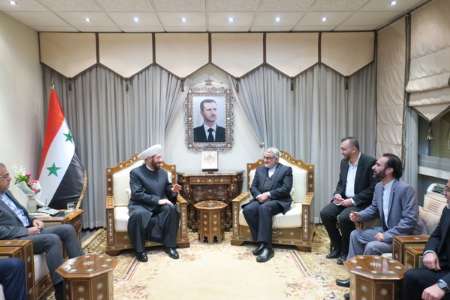 Terrorism could not bring Syrians to their knees: Cleric

IRNA – Terrorists and their supporters could in no way bring the Syrian people to their knees, Syria’s Grand Mufti Sheikh Ahmad Badreddin Hassoun said.

He made the remarks in a meeting with Chairman of Iranian Majlis (parliament) National Security and Foreign Policy Commission Alaeddin Boroujerdi on Thursday.

Aleppo victory is a beginning for getting rid of terrorism which has been created to divide the Islamic and Arab countries, he added.

The cleric underlined Iran and Syria cooperation in making proximity among various followers of Islamic faith as well as fighting against the perverted Takfiri way of thinking.

During the meeting, the Iranian MP for his part congratulated the recent victories of Syrian people in particular liberation of Aleppo.

He voiced hope for continuation of Syrians’ successes till final victory over terrorism.

The official underlined continuation of Iranian government and people’s full support for the Syrian people.

During his stay, the Iranian envoy conferred with the Syrian officials on issues of mutual interest and regional developments.