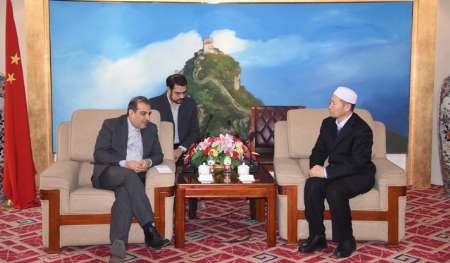 Iran envoy in China warns against spread of extremist ideologies

IRNA – Iranian ambassador to China called on the country’s Islamic Association on Friday to introduce Islam as the religion of love, compassion and mercy and prevent the spread of extremist and Takfiri ideologies.

Ali Asghar Khaji made the remarks during a meeting with Yang Faming newly-elected President of the Islamic Association of China.

‘The Islamic Association of China plays a crucial role in leading Muslims in the country and creating unity among them,’ Khaji said.

‘Today Iran is forcefully standing against the terrorists and perverted ideologies and it is ready to cooperate with its Chinese brothers to introduce true Islam,’ he said.

He also referred to Chinese President Xi Jinping initiative called ‘One belt, One road’, saying the initiative by the Chinese leader could foster proximity among regional and Islamic nations.

The Iranian envoy also hailed ties between Iranian cultural centers and the Chinese Islamic Association, expressing hope that the cooperation would continue further.

Yang Faming, on his part, recalled his trip to Iran as a good opportunity to get familiarized with plans run by the Imam Khomeini Relief Foundation and its efforts to remove deprivation, creating jobs and addressing social issues.

Yang Faming also described reviving the Silk Road as a good opportunity for the mainly Muslim countries lying on the historic route to promote cooperation especially in the cultural sphere.