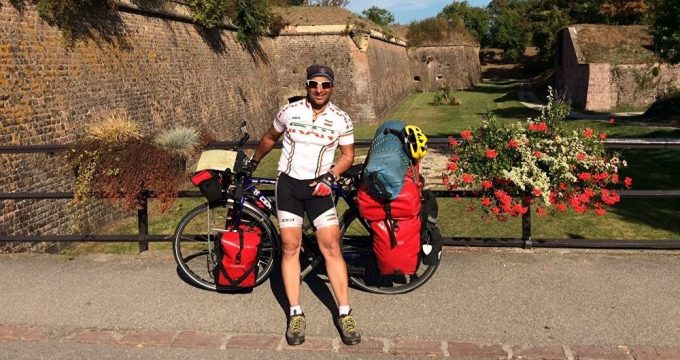 Cyclist clears 1,000 kilometers in 48 hours to save trees

Sputnik– A stalwart amateur Iranian cyclist performed an impressive feat of endurance as he travelled 1,000 kilometers in 48 hours on his bicycle in order to raise awareness about his environment protection project.

Mohammad Tajeran is an engineer, not a professional athlete, and he had never taken part in bicycle races like the Tour de France. And yet he managed to cross the distance between the city of Mashhad in northeastern Iran and Tehran in only 48 hours, riding his bike non-stop, all for the sake of protecting the environment. As Tajeran told Sputnik Persian, he didn’t come up with the idea of marathon bike rides promoting environment protection overnight. Ever since he became an engineer, Mohammad kept wondering what his true calling might be. “These thoughts pursued me for at least ten years. And then one night I had a dream telling me to go travelling and to do something in order to protect the environment,” he explained.

Having decided to follow this omen, Mohammad grabbed his bike and set course for Switzerland, where he formed the We Need to Protect Trees public eco-project.

“There in Switzerland the project also evolved into a community. Originally I only had two adherents, but very soon many took interest in our idea. We intend to expand and open our branches in different countries in order to teach kids across the world to protect the environment. Obviously the first branch of our community will be established in Iran and will serve as an example for activists in other nations,” he said. Obviously, such a major undertaking requires sponsors, so in order to raise awareness Mohammad Tajeran set off on his 1000-kilometer bicycle sojourn from Mashhad to Tehran. According to his calculations it will take about $1,300 to put the project on track. According to Tajeran, he already held about 500 study groups on environmental protection in 183 schools in 51 countries and has planted nearly 1,000 trees together with the students. “I cannot say that I live in some specific place these days. I’m travelling all the time. Yes, my family lives in Mashhad, but my home is on the road,” he declared.