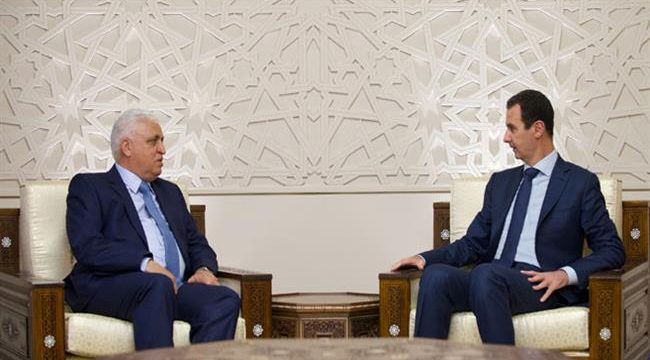 Press TV- Syrian President Bashar al-Assad has stressed the importance of strengthening cooperation and coordination with neighboring Iraq in the fight against foreign-sponsored terrorism and extremist groups.

During a meeting with visiting Iraqi National Security Adviser Faleh al-Fayad in Damascus on Thursday, Assad stated that the two countries should enhance their cooperation in the campaign against terrorist organizations.

The Syrian leader also described terrorism and its destructive Takfiri ideology as the common enemies of his country and Iraq.

Assad also congratulated the Syrian and Iraqi nations over the liberation of Syria’s northwestern city of Aleppo and advances of Iraqi government forces in Mosul, located some 400 kilometers north of the capital Baghdad.

The two sides further underlined that terrorism knows no boundaries, calling for concerted international efforts in the fight against terrorism.

They said not only will the resolution of the ongoing crises in Iraq and Syria shape the future of the Middle East, but it will also influence the entire world.

Syrian government troops and fighters from allied popular defense groups regained full control of Aleppo after foreign-backed militants and their families departed the city to the nearby northwestern city if Idlib.

A total of 129,642 civilians have been displaced from Mosul and neighboring areas ever since the start of the operations, according to figures released by the International Organization for Migration (IOM) on Tuesday.