A Look at Iranian Newspaper Front Pages on January 4

Iran Front Page- The ongoing war of words between the Iranian administration and Judiciary, particularly the comments made by President Hassan Rouhani and Judiciary Chief Ayatollah Sadeq Amoli Larijani against each other, was a top story today.

The speculations about Rouhani’s possible disqualification from running for upcoming presidential votes and the reformist camp’s preparations for introduction of an alternative also received great coverage.

Another top story today was the letter written by 37 American scientists to President-elect Donald Trump to urge him not to scrap Iran nuclear deal.

2- Health Minister: Some Want to Politicize Issue of Homeless Junkies Who Lived inside Graves

1- Ayatollah Mesbah Yazdi: We Have No Hadith that Says It Is Obligatory to Obey a Person Elected by People’s Vote

2- Government Spokesman: Administration Is Ready to Cooperate with Judiciary in Babak Zanjani’s Case

3- US: ISIS’ Capacity and Maneuverability in Mosul Coming to an End 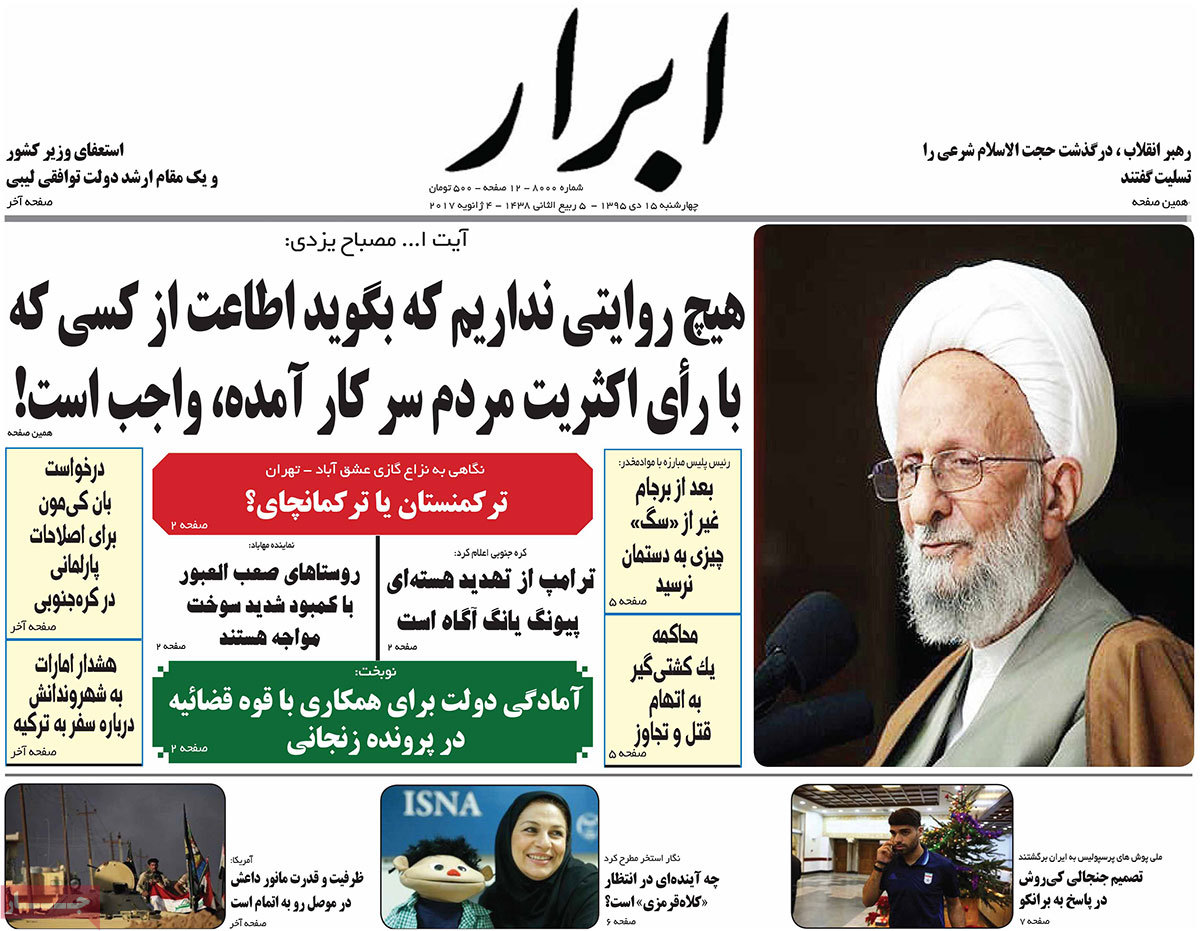 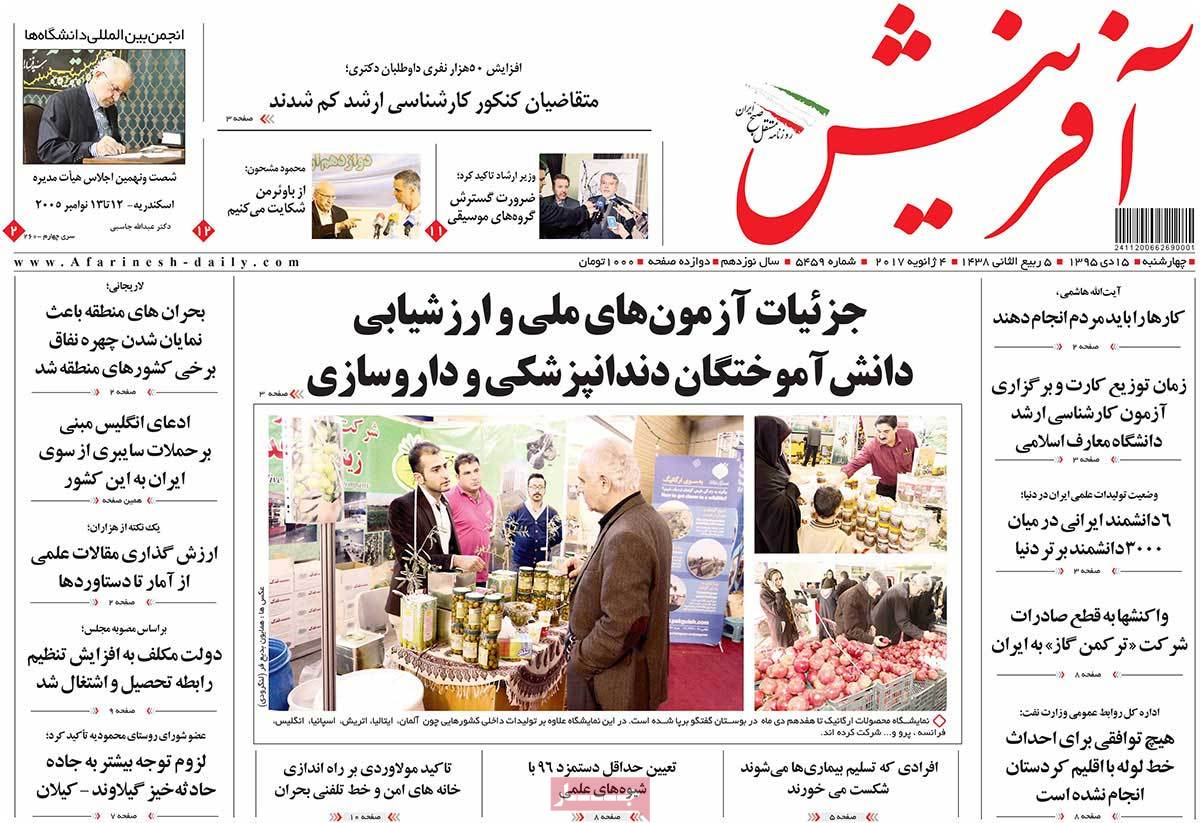 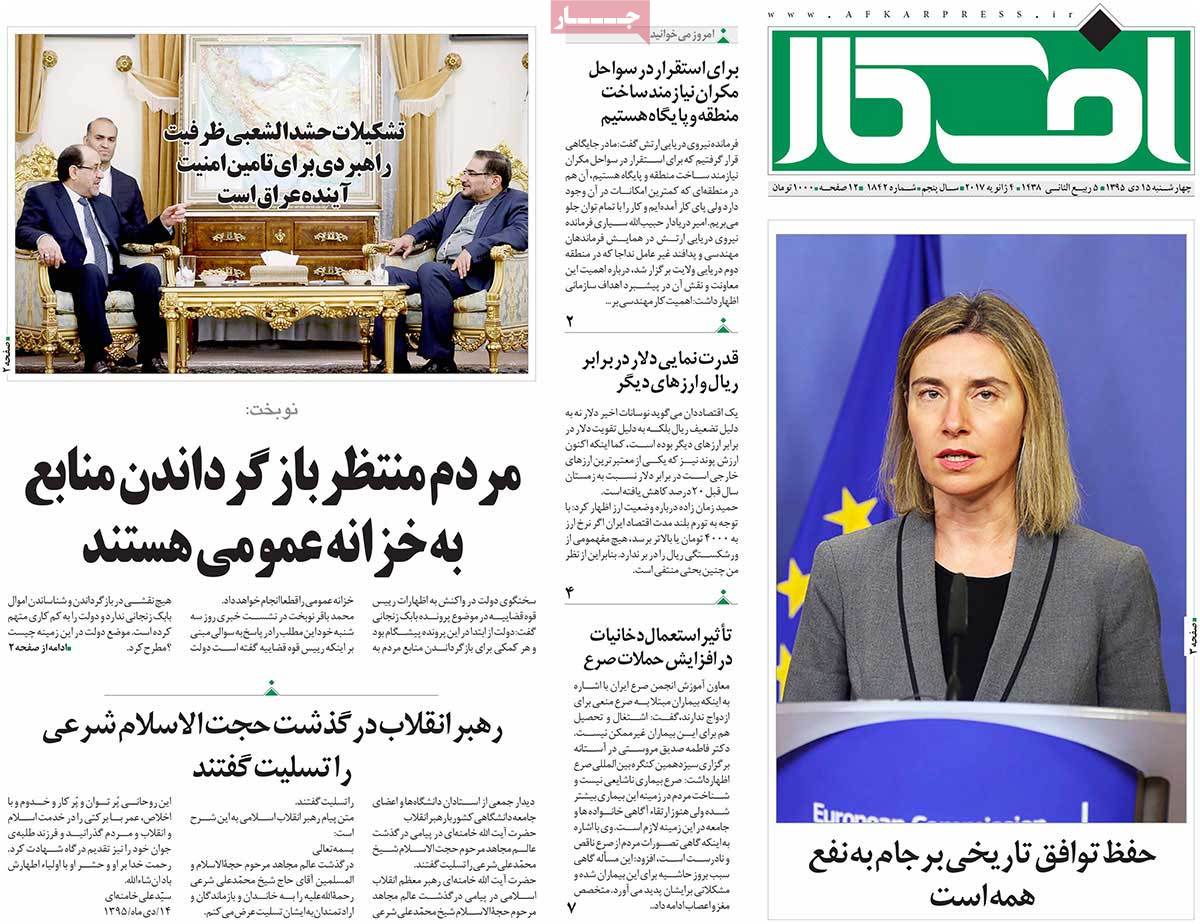 1- Reformists on Standby: Following Speculations about Possible Disqualification of President Hassan Rouhani from Running for Elections Once Again, Reformists Are More Seriously Considering an Alternative to Rouhani 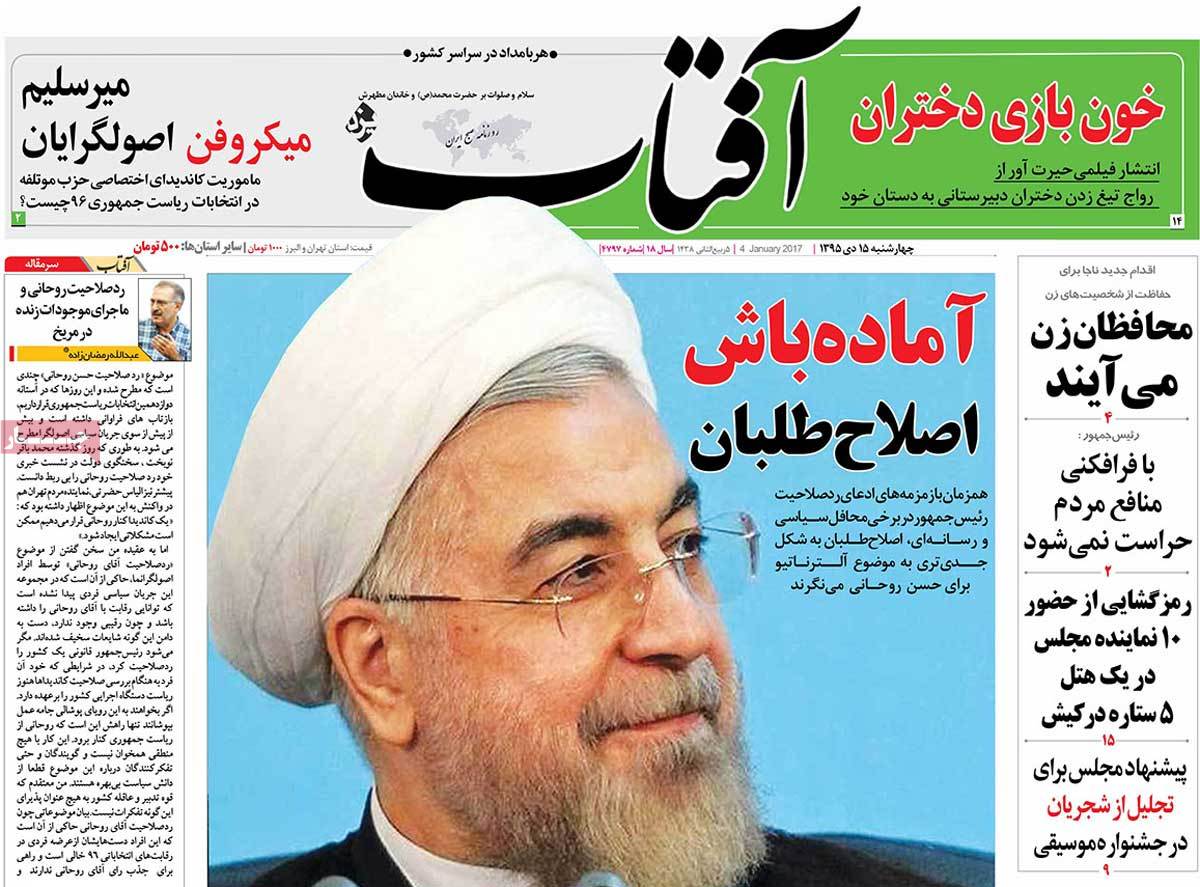 2- Interrogation of Netanyahu on Financial Charges 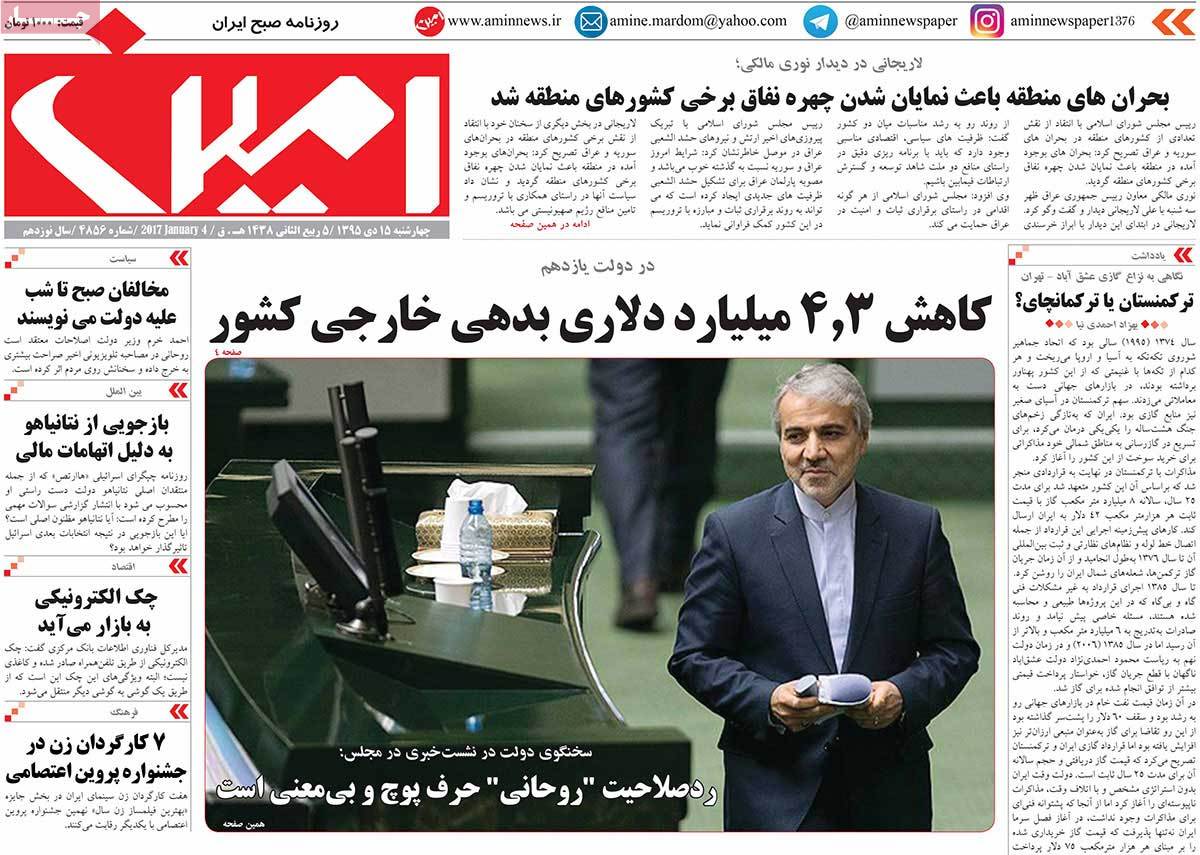 1- President: $2.7 Billion Has Been Plundered; People Has the Right to Know How Their Money Has Been Given to Babak Zanjani; People’s Interests Cannot Be Protected through Imprudence and Pinning the Blame on Others 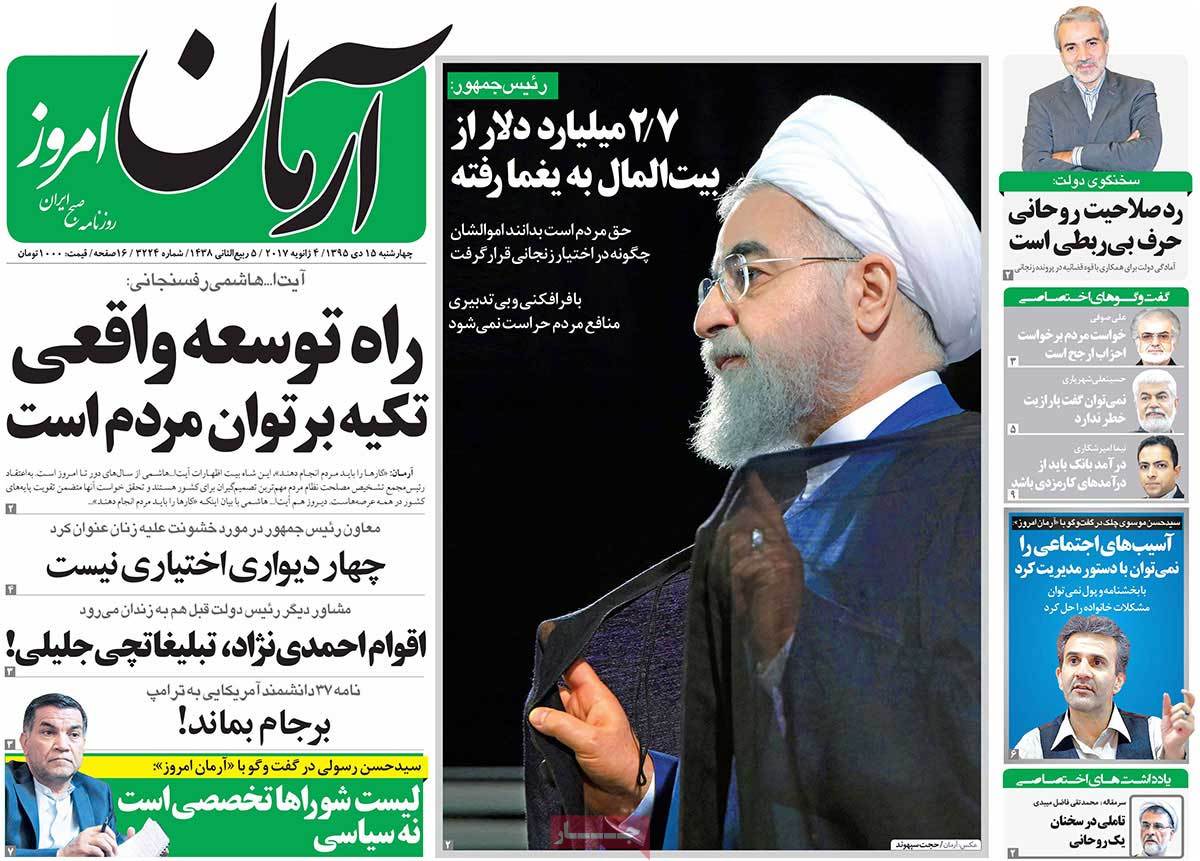 3- 40% of Houses in Iranian Villages Are Quake-Resistant 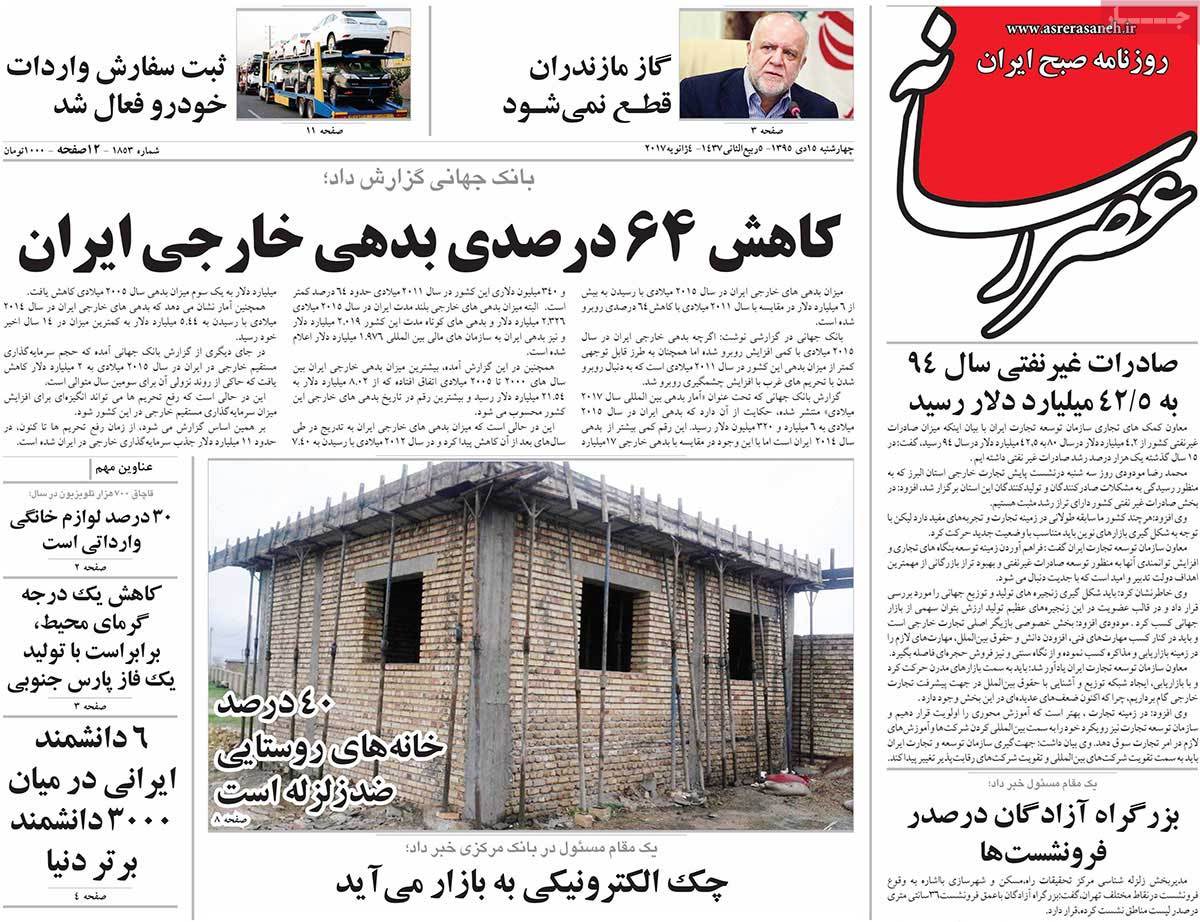 1- Tehran Prosecutor General after Releasing Golrokh Iraee on Leave and Sending Arash Sadeqi to Hospital after Hunger Strike: Prisoners’ Rights, Even Those of Dissidents, Are Observed 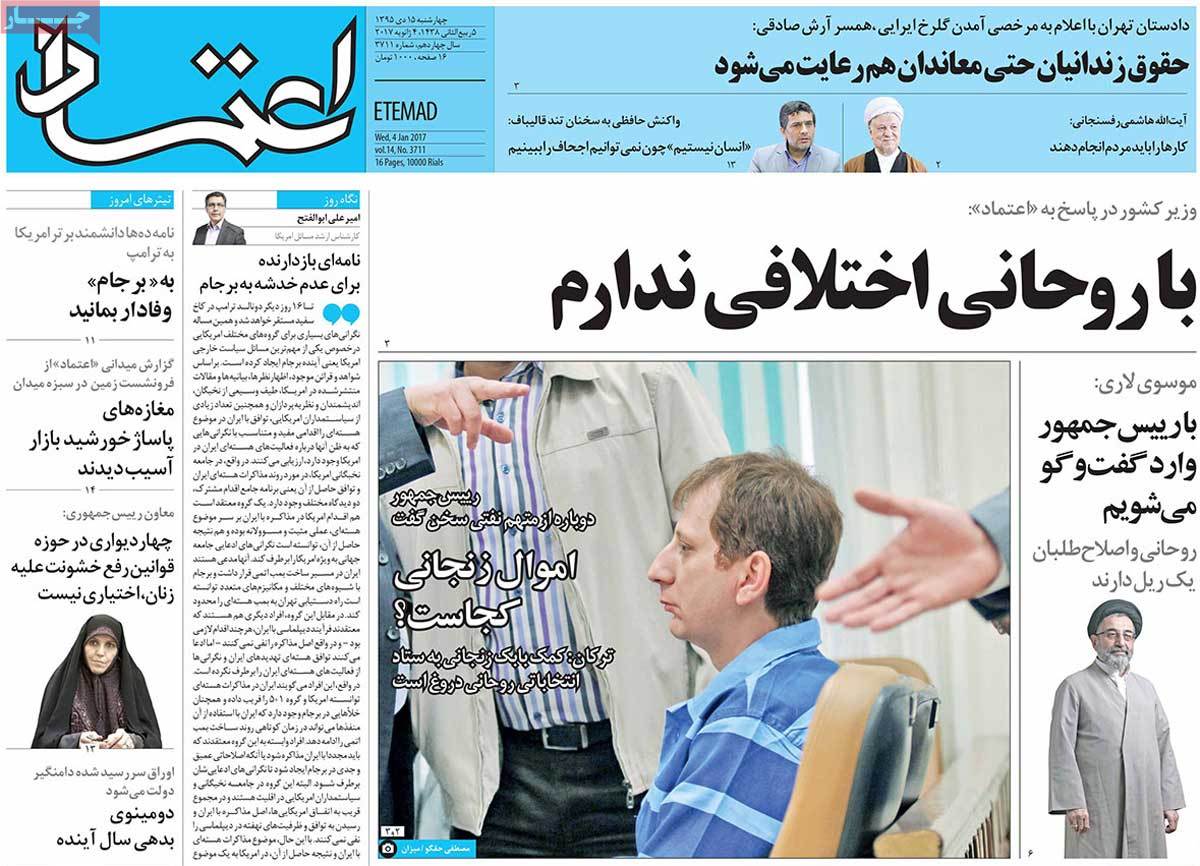 1- Photo Gallery of All ISIS Terrorists: Istanbul Attacker Is a Kyrgyz Man, but Moroccans Have Highest Share 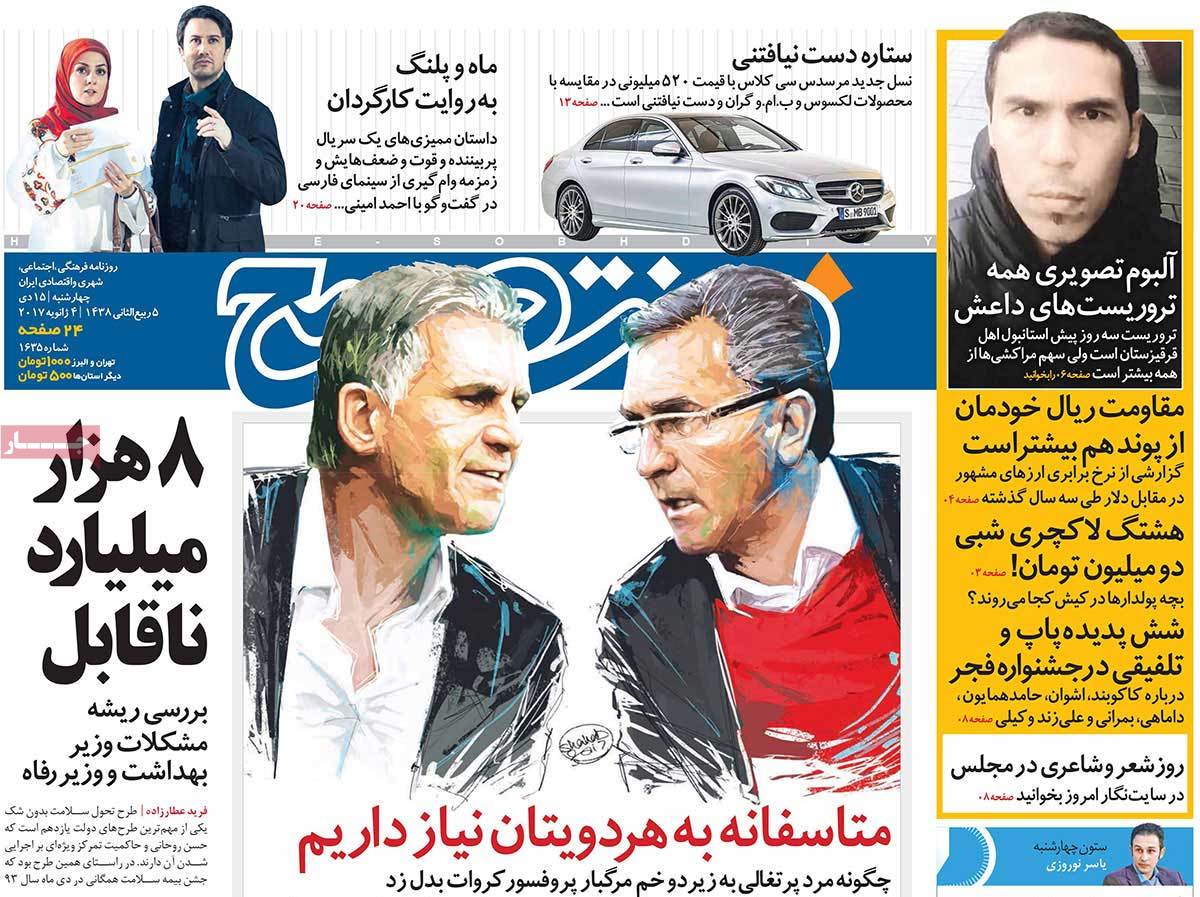 1- Tehran Prosecutor General Warns of Formation of Secret Corruption: Children of Some Officials Abusing Their Position for Committing Financial Crimes 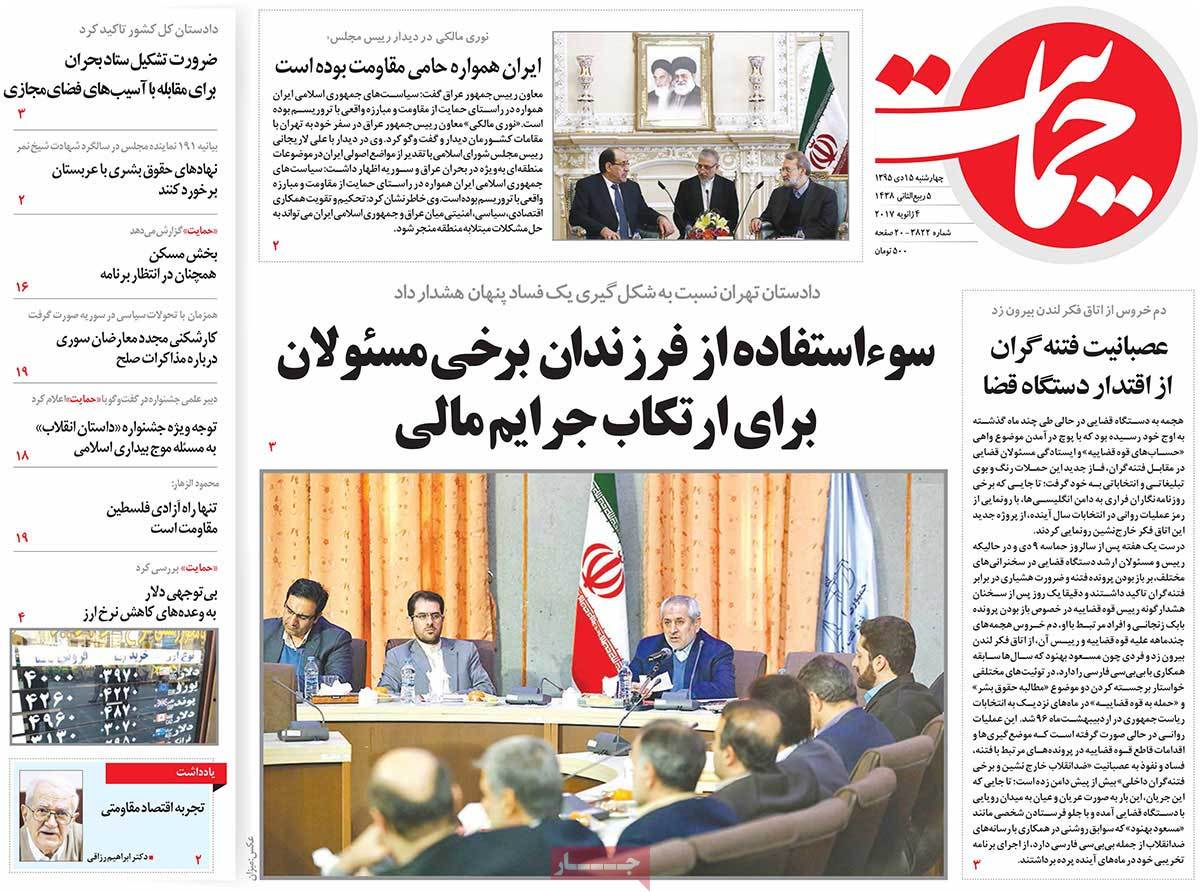 1- French Ambassador to Tehran: Huge Amounts of Foreign Investment Have Been Made in Iran in Post-JCPOA Era

2- National Achievements Ignored by Media Outlets Belonging to Government Opponents: $50 Billion of Deals Signed with the World in Post-JCPOA Era 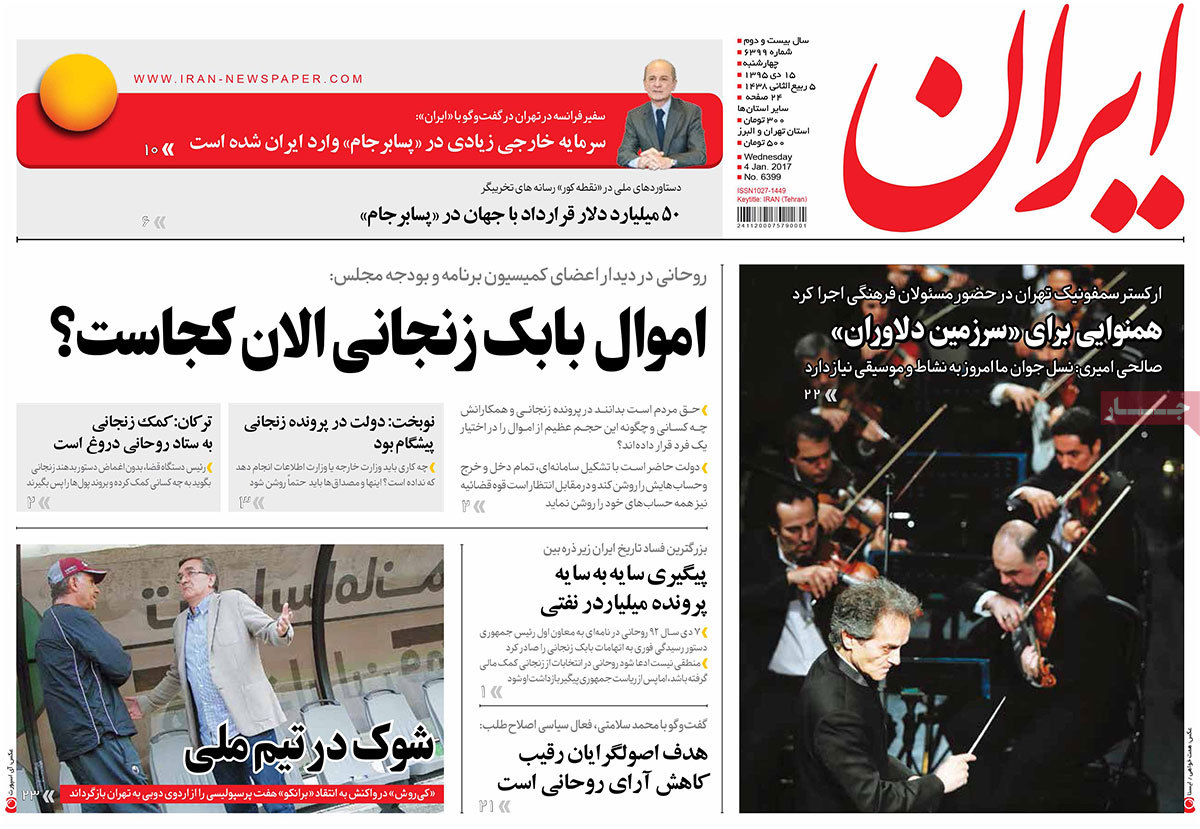 2- JCPOA Pears Imported from US: Pears Smuggled from US Sold in Tehran for $6.5 per Kilogram

3- US Congress Mulling over 3 Sanction Plans against Iran 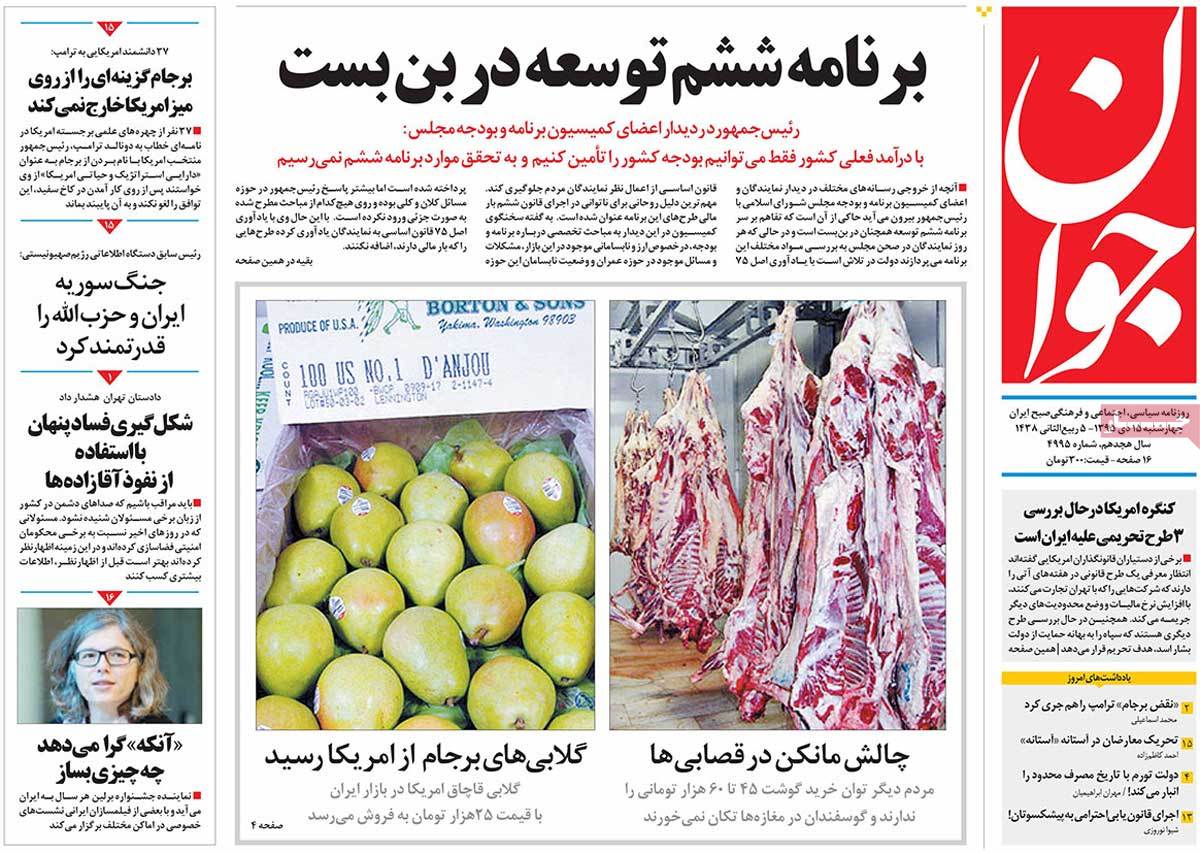 1- President: Government’s Main Approach Is to Establish Peace and Economic Stability in Society

2- Bahraini Clerics’ Request from Vigilant Consciences in the World 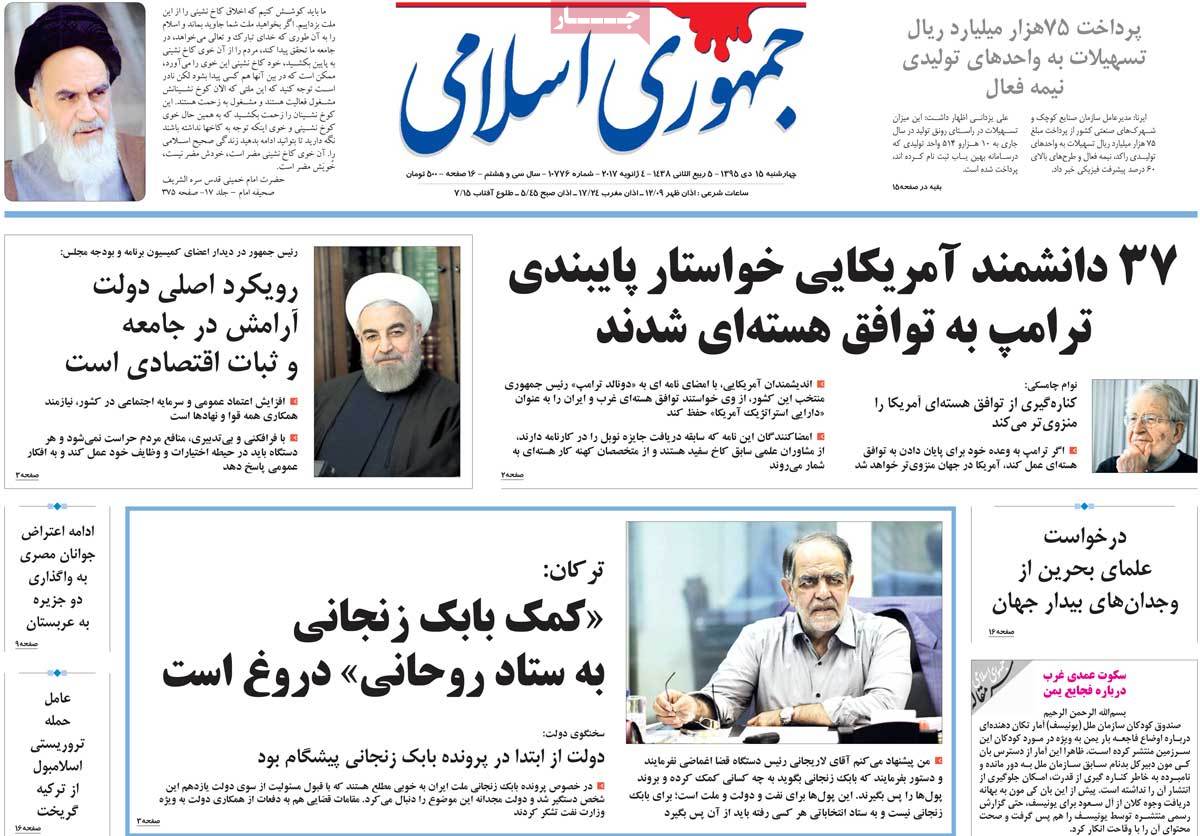 1- Trump Leaning towards Iran, Europe Moving Closer to Putin: Chomsky Says If Trump Keeps His Promise to Scrap Nuclear Deal, US Will Become More Isolated in the World 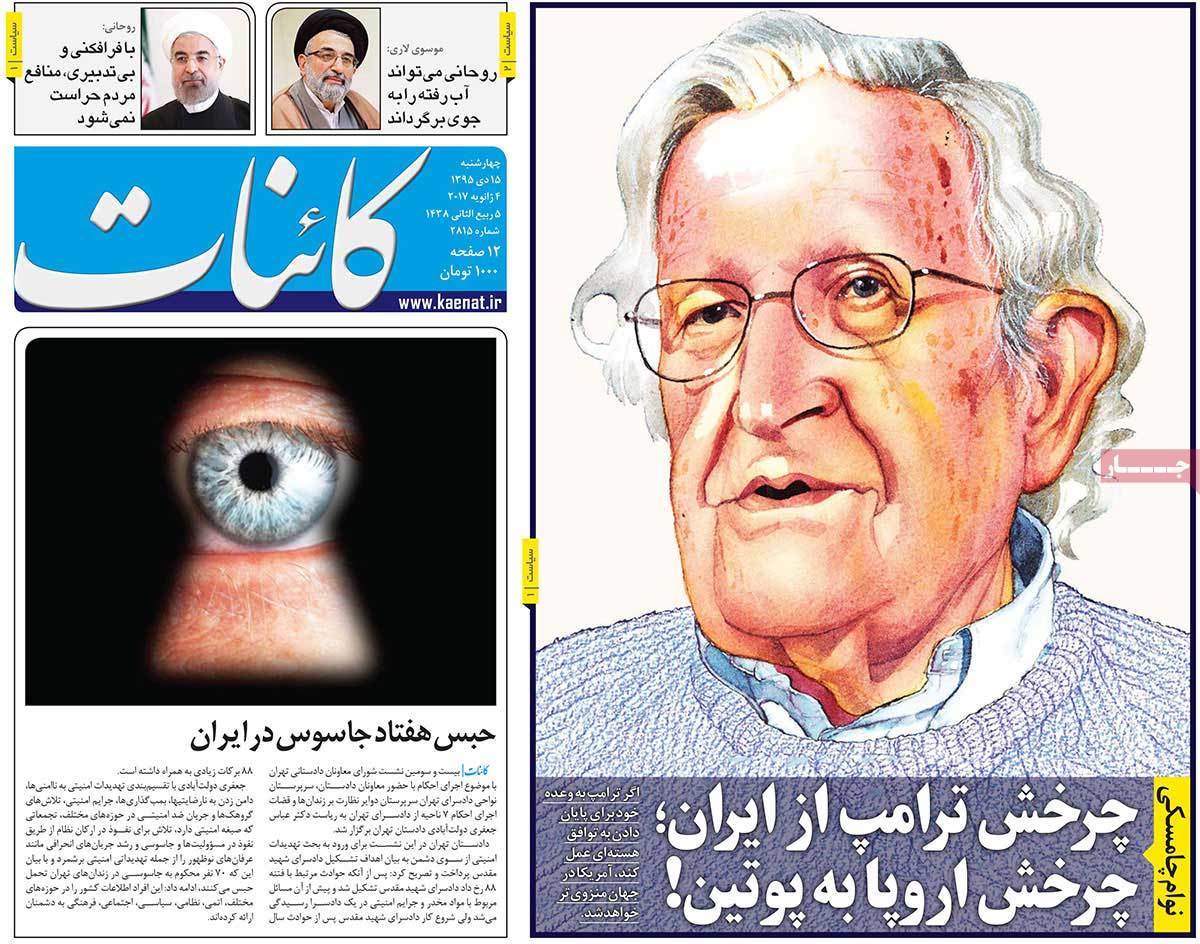 1- Government’s Economic Report Even Failed to Please Its Supporters 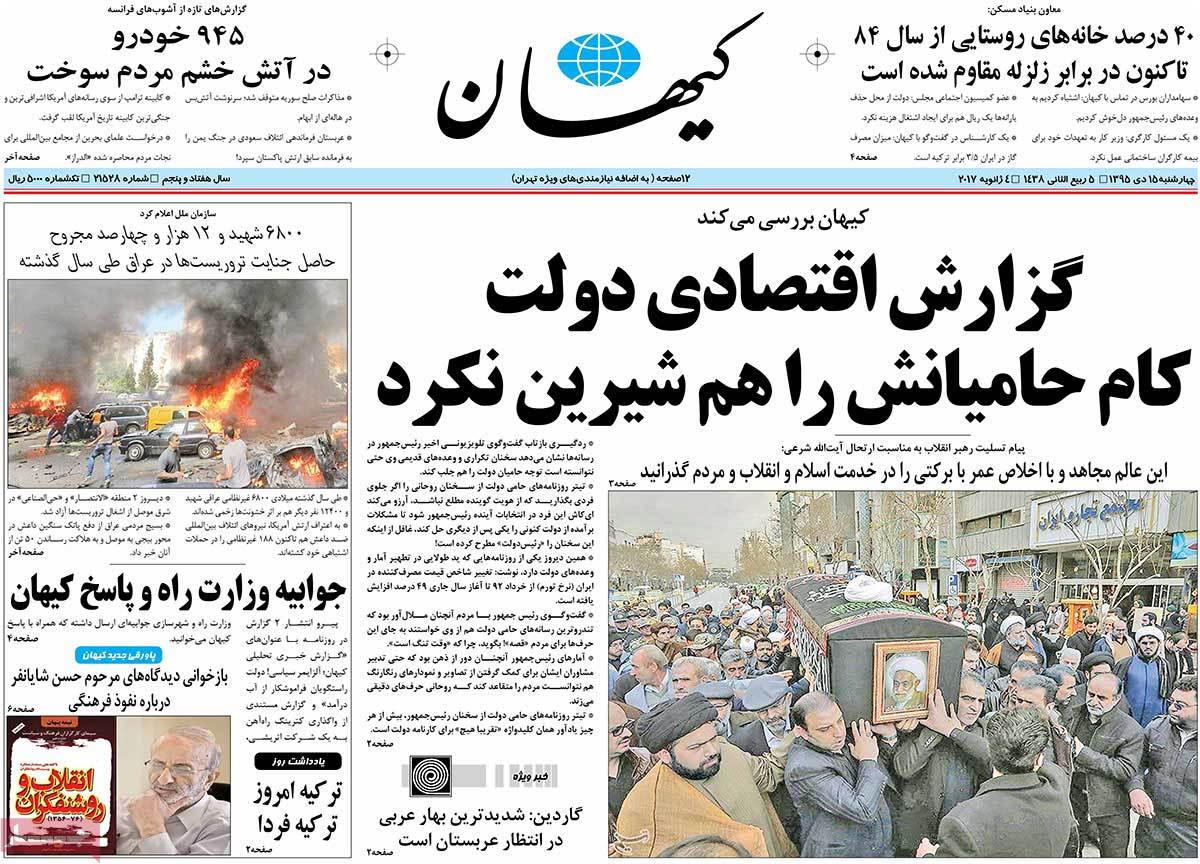 2- Oilfields to Be Put Out to Tender in Late January 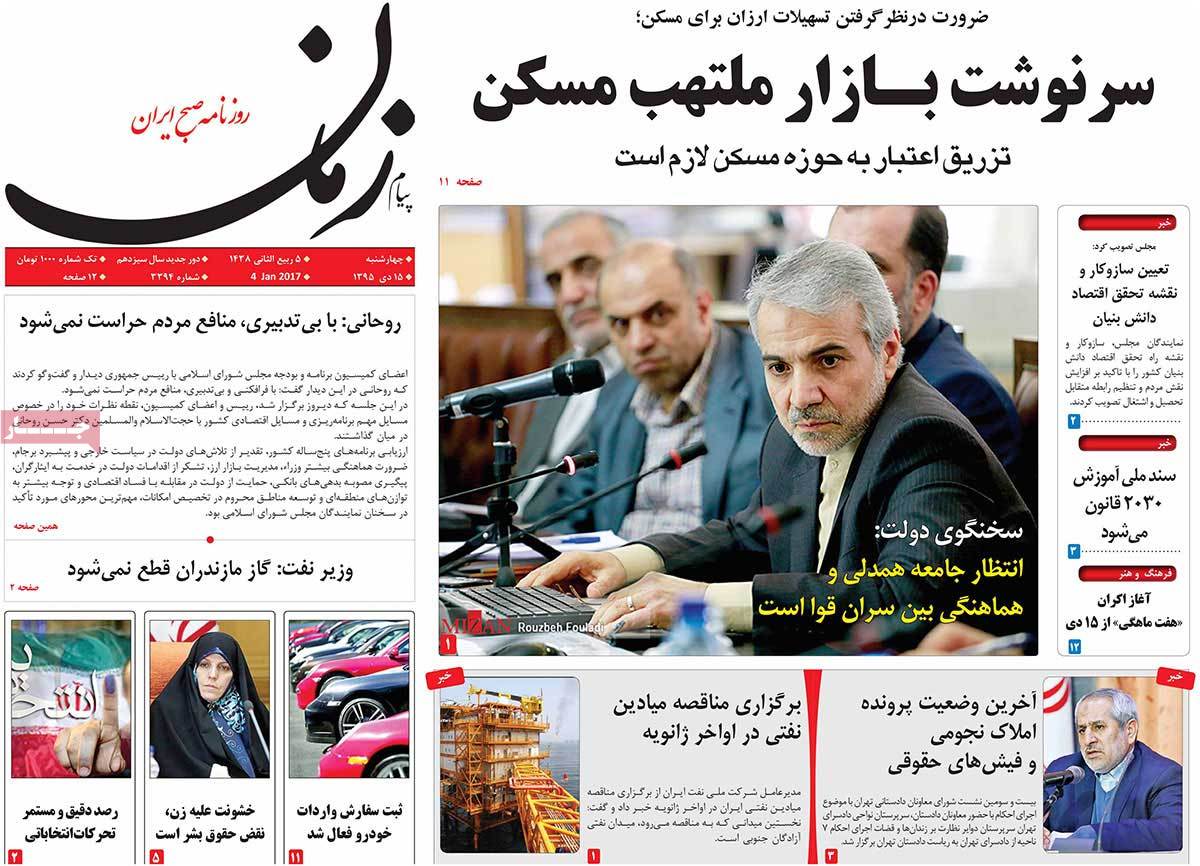 2- Ayatollah Javadi Amoli: We’re Obliged Not to Let Anyone Be Poor in the Society 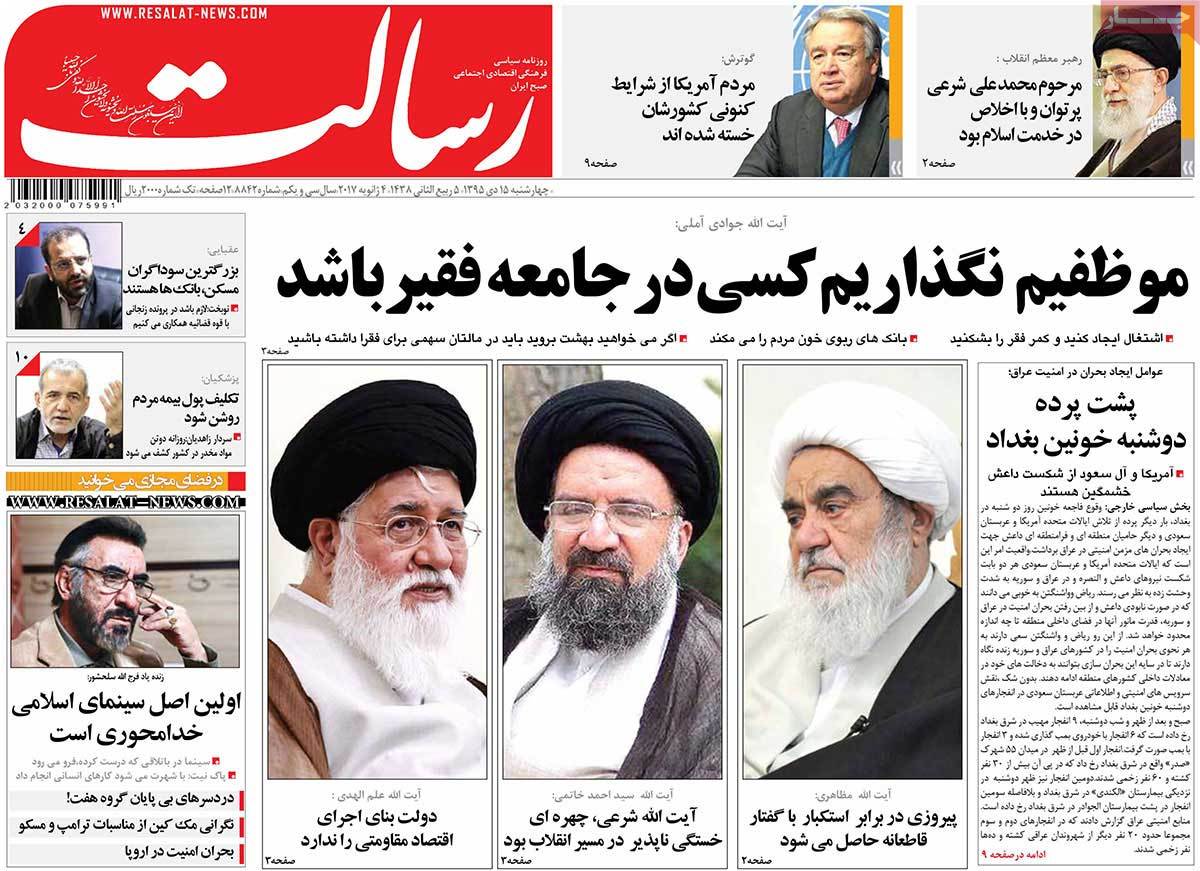 1- Rouhani’s Response to Judiciary in Twitter: Government Will Clarify All of Its Expenses and Sources of Income [during election campaigns] If Judiciary Clarifies about Its Own Bank Accounts 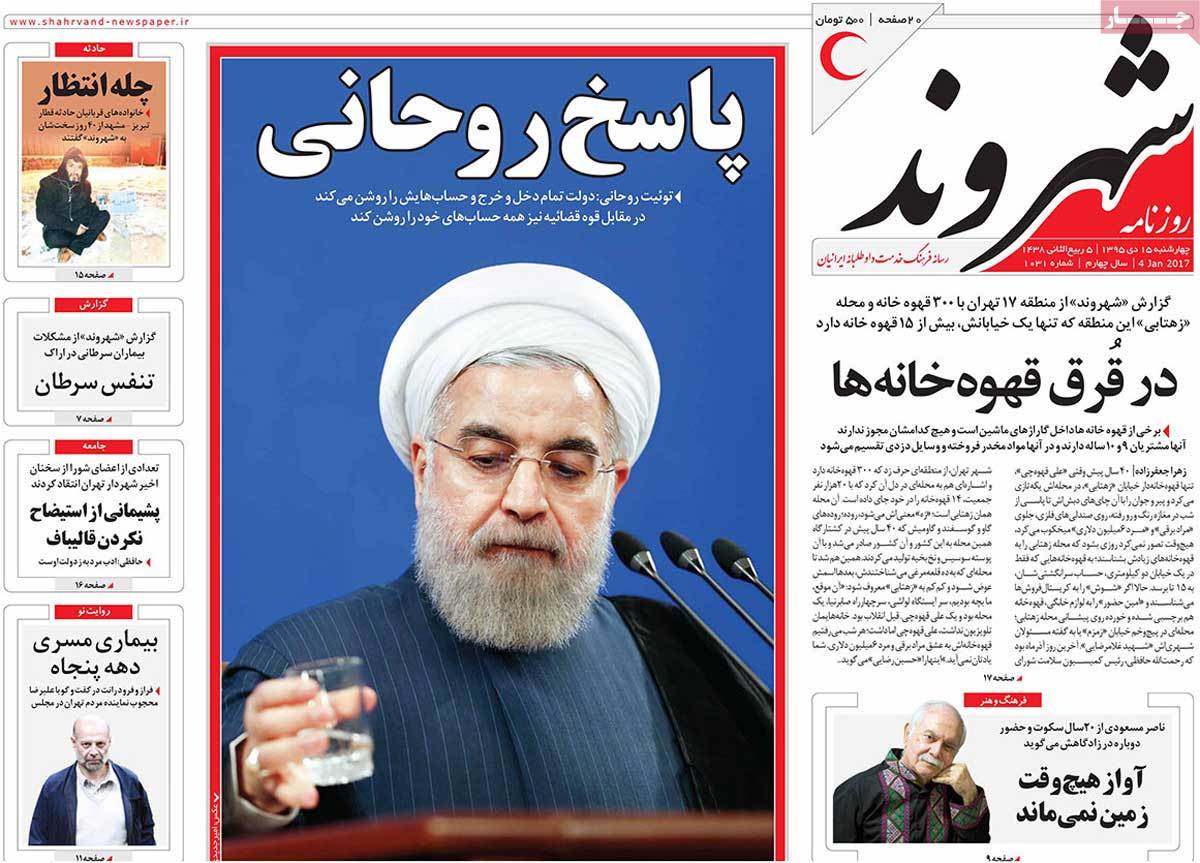 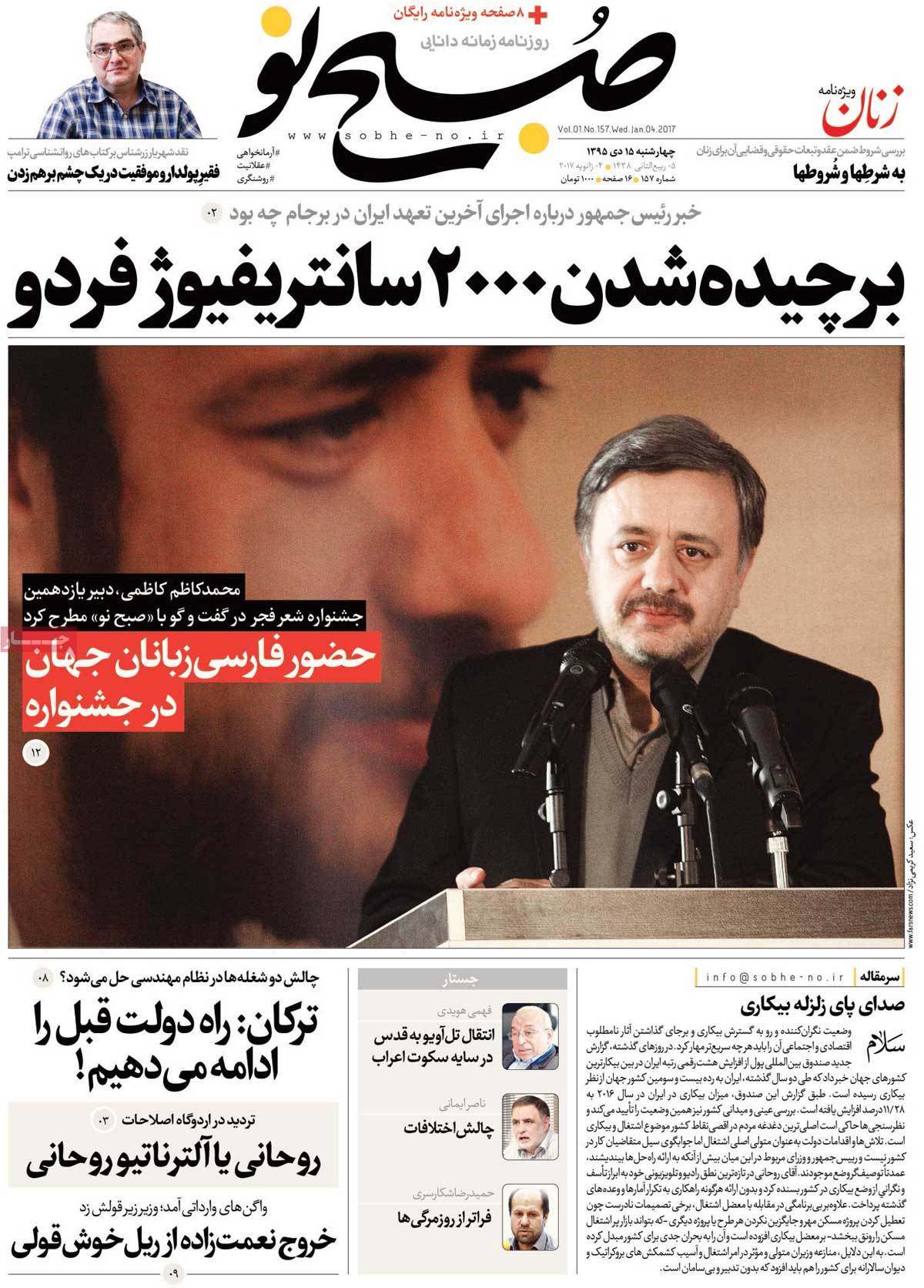