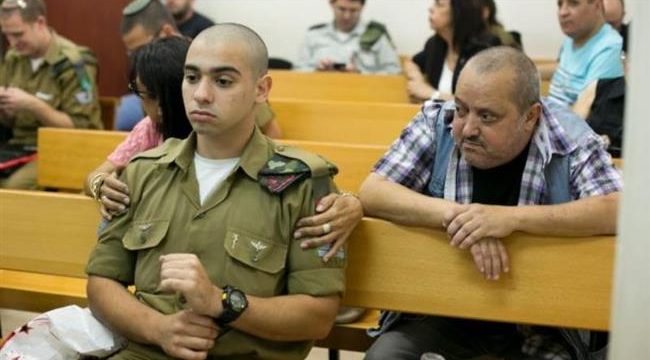 Press TV- An Israeli soldier who shot and killed a Palestinian execution-style in the city of al-Khalil (Hebron) back in March 2016 has been convicted of manslaughter.

A military court convicted Sergeant Elor Azaria, 20, of one charge of manslaughter on Wednesday. The court said Azaria’s sentence would be handed down at a later date.

The Israeli trooper shot at the head of Palestinian Abed al-Fatah al-Sharif, who was already wounded by Israeli fire and lying motionless on the ground following an alleged stabbing attack in al-Khalil on March 24 last year. Another Palestinian filmed the scene, including the shooting, and released it through an Israeli human rights group.

Extremist Israelis have been protesting in support of the soldier ever since. During the Wednesday court session, hundreds of them gathered outside the courtroom at a military base in central Tel Aviv.

Hard-line Israeli politicians have also defended the soldier and his killing of the incapacitated Palestinian.

Palestinians, however, have been infuriated by the murder, with Palestinian officials having formerly asked a United Nations investigation into the killing, which they did not get.

The killing back in March last year came amid heightened tensions that began in the occupied territories in August 2015, when Israel imposed restrictions on the entry of Palestinian worshipers into the al-Aqsa Mosque compound in East al-Quds Jerusalem.