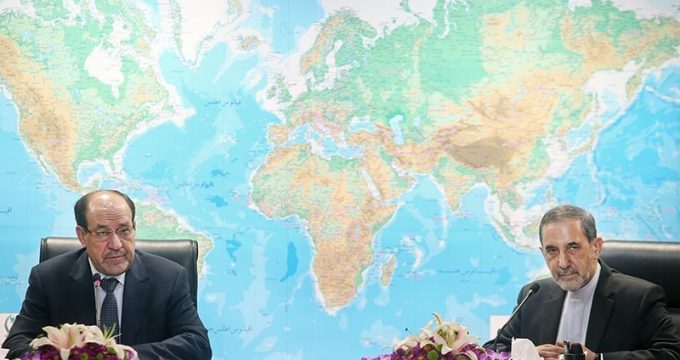 IRNA – Iraqi Vice President Nouri al-Maliki referred to developing ties with Iran and enforcing a strong front for foiling post-Daesh seditions as the aims of his trip to Tehran.

Addressing a Tuesday meeting with the Head of the Strategic Research Center of Iran’s Expediency Council Ali Akbar Velayati, al-Maliki said despite the gains so far, Iraq is not sure about seditions to come to an end in the future.

‘We were invited to Iran by our Iranian brothers to meet with the Supreme Leader of the Islamic Revolution Ayatollah Seyyed Ali Khamenei and other senior officials in the present sensitive and crucial condition of the region and the world,’ he added.

‘Despite existing challenges and problems, the resistance front has always overcome the enemy front in political, military and other sectors,’ he said.

He referred to victories in Aleppo, saying that Iraq is ready to promote a strong front in post-Daesh era to stop imminent future seditions.

The economic capital of Syria, has been cleansed and liberated on December 23 after four years of occupation by terrorists.

The victory is an emphasis on power of the Syrian army and the allied forces to end battle with the terrorist groups, which serving as a prelude to a new phase to defeat terrorism in entire part of Syria.

Al-Maliki is the Iraqi VP and Secretary General of Iraq al-Dawa Party arrived in Tehran on Saturday to consult with Iranian senior officials.