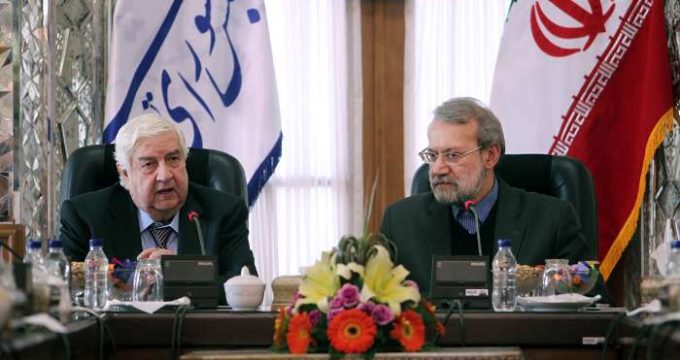 Ali Larijani made the remarks in a meeting with Syrian Foreign Minister Walid al-Muallem on Sunday in Tehran.

While congratulating al-Muallem on the victories of the Syrian government, nation and army against terrorists and the liberation of the city of Aleppo, Larijani maintained that the victories are a clear testament to the resistance and resilience of Syrian people and army, adding that conditions are now ready for restoring peace and stability to Syria.

Larijani highlighted the significance of peace talks aimed at achieving a political solution to the Syrian crisis, adding “the Islamic Republic of Iran together with Russia and Syria can take important steps toward this objective by making joint plans and adopting similar approaches.”

The Iranian parliamentary head further stressed that the upcoming Astana meeting on the Syrian situation in mid-January to be attended by Iranian, Russian and Turkish presidents will be pivotal for achieving sustainable peace in the war-torn country.

“Iran will continue its full support to the Syrian nation on the resistance ground and various political arenas,” Larijani said.

The Syrian top diplomat, for his part, noted the key position of the Islamic Republic in region, hailing Iran and Russia’s support to the Syrian nation and government in the fight against terrorism.

He also called for further cooperation and coordination among these three countries, adding “with a serious international will for combating terrorism, the roots of this scourge will be eradicated from Syria in less than a year.”