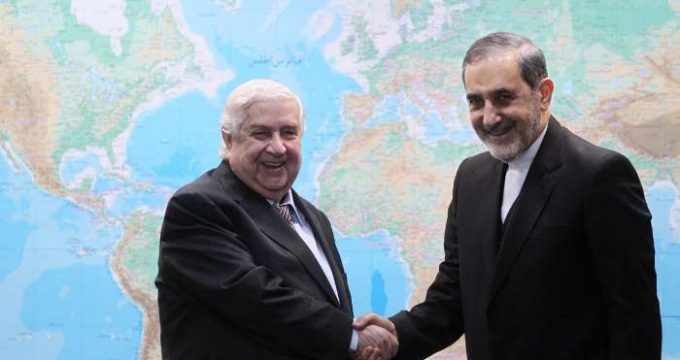 Aleppo victory was due to resistance: Syrian FM

IRNA – Aleppo victory was due to resistance to the terrorist groups, the Syrian Foreign Minister Walid al-Moallem said on Sunday.

He made the remarks in a meeting with head of the Strategic Research Center of Iran’s Expediency Council Ali Akbar Velayati.

Liberation of Aleppo was the victory of both Iran and Syria, the Syrian foreign minister said.

He said that the victory was the fruit of efforts made by the resistance front.

He noted that Aleppo liberation and the decision made by the Saudi government to halt the military operation is a new opportunity for the friendly states to help the Syrian reconstruction.

Al-Moallem said that if some people suppose that they can use the second meeting in the Kazakh capital, Astana, to propose issues which are not compatible with the Syria interests, they have isolated themselves and will miss the opportunity.

For success of the Astana talks, the armed opposition should steer clear of al-Nusra Front and Daesh, he added.

The Syrian foreign minister noted that the armed opposition should retreat from Aleppo suburb in order to restore sense of peace security to people living in the city.

The armed opposition should know that it is the Syrian Army which came victorious in Aleppo and they should do the pre-requisite works to prove that they are willing to end the humanitarian crisis in Syria, he added.

The Syrian foreign minister thanked Iranian people, government and Supreme Leader for contribution to the Syrian government in political, economic and military fields to eliminate global terrorism and find a political solution for Syria.

Syria is satisfied with coordination among Iran, Russia and Syria for its impacts on the international campaign aganist terrorism, he added.

‘Please, acknowledge our thanks to the Supreme Leader for His wise leadership in fighting against terrorism.’