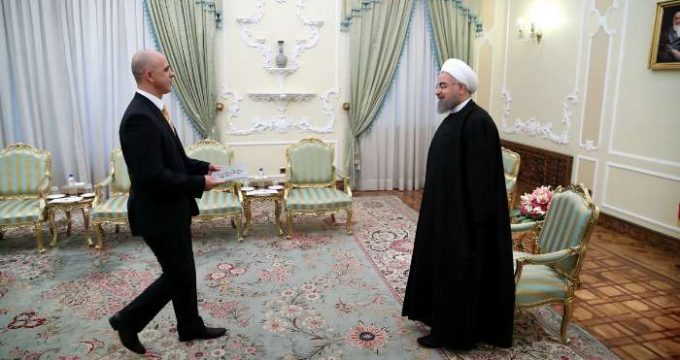 President Rouhani made the remarks during a Saturday meeting with Romania’s new Ambassador to Tehran Adrian Kozjacski, who submitted his credentials to the Iranian chief executive during the meeting.

“The Islamic Republic welcomes the expansion of cooperation in all areas with the European Union, including with the country of Romania,” he said.

There is nothing in the way of the enhancement of mutual relations with Romania, the Iranian president said, adding that the two countries enjoyed many capacities that could be used toward that purpose.

Rouhani said, given Iran’s interest in reinforcing the transportation channels leading to and from the country, especially railways, Romania can act as the Islamic Republic’s gateway to Europe via the Black Sea and can in return enjoy more expeditious access to Middle Eastern and Asian markets through Iran.

The Iranian president also said that Iran and Romania’s joint economic commission is expected to meet in the future in the Romanian capital of Bucharest.

He urged Romania to avail itself of the opportunities that have come about on the back of Iran’s 2015 nuclear agreement with world powers by boosting cooperation with the Islamic Republic in the banking and insurance sectors.

Kozjacski, for his part, said Bucharest was determined to expand its relations with Iran in all areas of interest.

Also on Saturday, Rouhani met with Germany’s new Ambassador to Tehran Michael Klor-Berchtold, telling him that the countries’ respective capacities should be used to generate a leap in bilateral cooperation in all areas.

Germany has always been defined for Iran as a European country with “good traditional” ties with the Islamic Republic and Iran’s “first trade partner” in the EU, the president noted.

He hailed that the bilateral ties had witnessed an upward trend following the conclusion of the nuclear deal, known as the Joint Comprehensive Plan of Action (JCPOA). He also thanked Berlin for its instrumental role in the conclusion of the accord and insisted that the European state continue performing its positive role in sustaining the agreement.

For his part, the German envoy communicated his country’s seriousness in furthering its ties with Iran in all sectors, especially in modern technology.

Germany is a party to the JCPOA. So are the US, the UK, France, Russia, and China.

Klor-Berchtold also stressed that Iran and Germany had to enhance cooperation in issues concerning regional affairs too and called Iran “a very important regional player without whose participation no [required] solution can come about.”

“The Government of Prudence and Hope is endeavoring to expand friendly ties with all countries,” he said at the meeting, referring to his administration.

“The government has always laid emphasis on boosting relations on the international arena on the basis of mutual respect and common interests,” he added, and urged the envoys to work toward that goal.