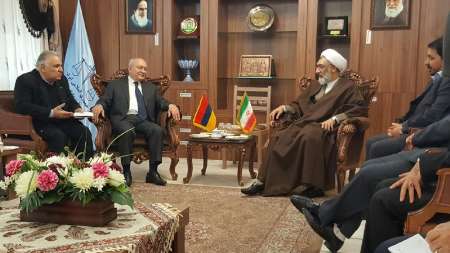 He made the remarks in a meeting with Minister of Justice Mustafa Pour Mohammadi.

Hovsepyan said that all Iran’s neighbors are Muslim, except Armenia and that although Armenians are followers of separate religion, they developed longstanding amity with the Islamic Republic of Iran.

Given the visit of head of Iran’s Inspectorate General Nasser Seraj to Armenia last year and the visit of Iran’s Attorney General Mohseni Ejaei to Armenia three years ago, an agreement on judicial cooperation was signed in 2013.

‘I am on a visit to Tehran at invitation of my Iranian counterpart Mr. Seraj to follow up implementation of the agreements already signed for judicial cooperation.

Chairman of the Investigative Committee of Armenia said that the number of Iranians responsible for wrongdoing in Armenia has reduced noticeably and they will be extradited to Iran.

Hovsepyan underlined regional states cooperation to restore security in the region, saying that Iran and Armenia should do serious jobs in the field of human rights.