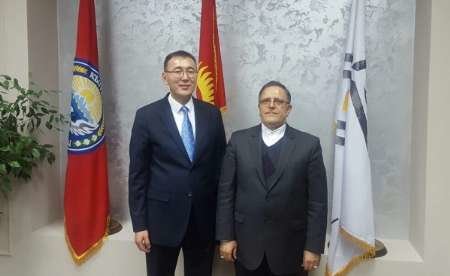 Governor of Central Bank of Iran (CBI) Valiollah Seif and Acting Chairman of the National Bank of the Kyrgyz Republic Tolkunbek Abdygulov met on the sidelines of President Rouhani’s visit to the Central Asian country.

During the session, which was also attended by Head of Iran Chamber of Commerce, Industries, Mines and Agriculture (ICCIMA) Gholamhossein Shafei, the two sides sought venues to uplift volume of trade turnover and to use Iran and Kyrgyz national currencies.

Seif expounded viewpoints and approaches taken by Iran towards northern neighbors, Kyrgyzstan in particular, in the post-JCPOA era and emphasized the need for removing barriers faced by businessmen and economic activists of both countries by immediate inking of banking cooperation agreement between central banks of Iran and Kyrgyzstan.

Tolkunbek Abdygulov, for his part, voiced readiness to develop banking relations with CBI underscoring that together with governors of Kyrgyz banks, he would make a visit to Tehran in the coming months in order to meet with representatives of Iranian in a bid to bolster bilateral collaborations.