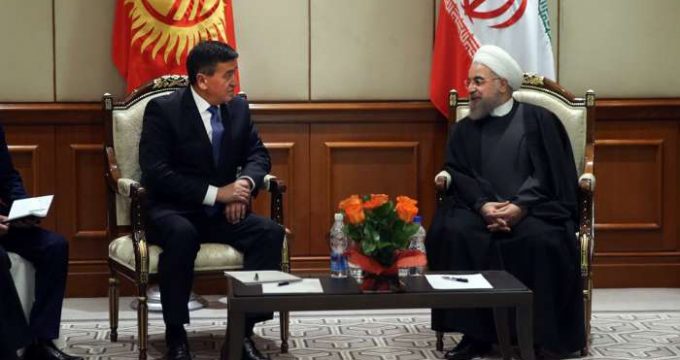 MNA– Iranian President Rouhani on Fri. called on Iran-Kyrgyzstan joint commission to have a more active part in improving bilateral ties and expanding mutual cooperation in all areas of interest.

Iranian President Hassan Rouhani made the remark in a meeting with Kyrgyz Prime Minister Sooronbay Jeenbekov in Bishkek on Friday.

During the meeting, Rouhani maintained that the Islamic Republic holds in the highest regard its neighbors in Central Asia, especially Kyrgyzstan, and highlighted the need for taking full advantage of all existing capacities and opportunities to further develop the level of relations between the two countries.

Rouhani stressed the importance of facilitating visa issuance and developing banking ties and financial transactions between Tehran and Bishkek for the development of trade and economic relations of both countries, saying the private sectors of Iran and Kyrgyzstan need to receive incentive for further joint cooperation.

Expressing dissatisfaction with the current level of economic ties between the two countries, President Rouhani urged the two countries’ joint commission to plan for improving trade ties to a desirable level.

Rouhani also stressed cooperation in the fields of agriculture, transit, transport and railway.

Noting that regional security is of the highest significance to Iran, Rouhani said “Iran is ready to offer its own experiences in fighting terrorism, extremism and drug trafficking to friendly countries in the region.”

Kyrgyz Prime Minister, for his part, stressed his country’s resolve for expanding all-out relations with Iran and putting into effect all agreements and documents reached between the two governments.

He also stressed Kyrgyzstan’s efforts for expanding cooperation with Iran on energy, agriculture, facilitation of visa issuance and banking transactions.