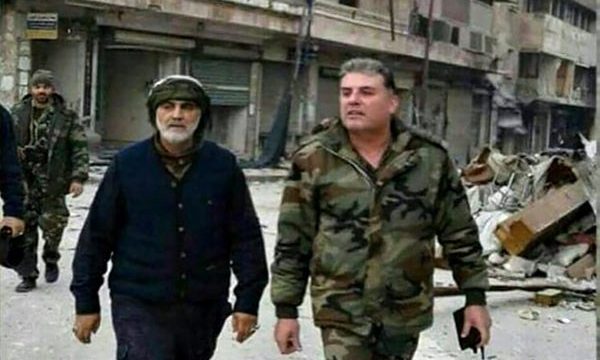 IFP- After the full liberation of Aleppo from Takfiri [extremist] terrorists, the US is creating a hostile atmosphere against Iran by accusing it of violating the UNSC Resolution that led to removal of all anti-Iran sanctions imposed by the UN.

John Kirby, the US State Department spokesman, claimed that the recent visit of General Soleimani, the Commander of IRGC Quds Force, to Syria has been a violation of UN Security Council Resolution 2231.

As regards the photos showing General Soleimani in Aleppo, Kirby said, “His travel is a violation,” according to a Farsi report by ICANA.

“He is one of the designated individuals.” He added. “No exemption to the travel ban was sought, and so it does constitute a violation of UNSCR 2231.”

“We do intend to consult with our partners on the Security Council about how to address our concerns with this,” he said.

“We’ve long said that Iran needs to choose whether it’s going to play a positive role in helping peacefully resolve conflicts such as in Syria or whether it will choose to prolong them.”

The US makes these claims while violating the JCPOA by extending the sanctions against Iran. Plus, General Soleimani had appeared in Iraq several times before, and there was no allegation of deal violation.

Meanwhile, Iranian Parliament Members have reacted to the accusation.

“It is none of their business where in the world Iranian authorities go,” commented Morteza Saffari Natanzi, an Iranian MP, about American claims about the violation of UNSC Resolution by the Iranian commander travelling to Syria.

“Such a claim is unjustifiable,” he added. “The US is just following its old ways of spreading anti-Iran propaganda.”

He went on to say that Iran would never give up considering its national interests and resistance, and doesn’t seek the approval of others for it.

“The allegations are baseless. We have legal consular relationships with the official administration of Syria,” said Seyyed Hossein Naqavi Hosseini, another Iranian lawmaker. “No resolution is preventing Iran from sending its authorities to regional countries.”

“Those Western countries would seek permission from Iran to travel to the region in the future, as here is the home of Muslims,” said Javad Karimi Qoddousi, another MP. “We travel easily around the region, as the authorities of regional countries come to Iran.”

“The West is covering up its abject failure in Aleppo by these undignified claims,” he added. “Western countries should open their eyes to see that the Middle East is no more a place to boss people about.”

“The presence of General Soleimani in Syria is just a pretext for claims about the violation of UNSCR 2231,” noted Ardeshir Nourian, another lawmaker.

“Washington is projecting its own false strategies,” he added. “It is an excuse to exert pressure on Iran and influence public opinion.”

The Islamic Revolution Guards Corps (IRGC) Quds Force has been providing Syria and Iraq with advisory help in their fights against terrorism based on the requests of their legitimate governments.