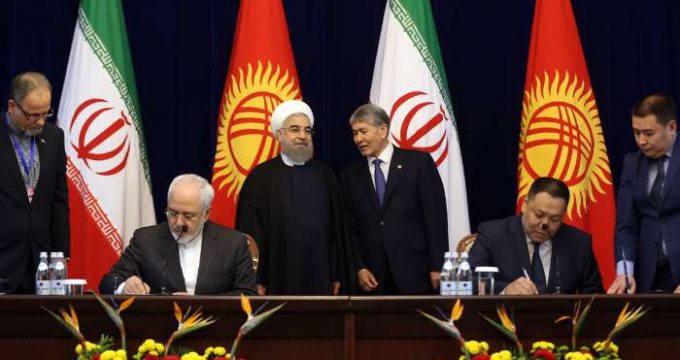 The memoranda of understanding signed between the two countries in the presence of President Rouhani and President Almazbek Atambayev include: an agreement on expanding cooperation in the field of communications and information technologies; an MoU on preventing and combating the production, trafficking and consumption of illicit drugs, psychotropic substances and precursors; and a cultural exchange program between the two countries’ ministries of culture valid for the time period of 2017-2020.

The two sides also inked a memorandum of understanding on joint cooperation in the fields of health, medicine, pharmaceuticals, and medical equipment. Another MoU was signed on social and labor sphere aimed at developing bilateral relations and cooperation between Iran and Kyrgyzstan.

During the visit, a long-term cooperation program between Iran and Kyrgyzstan for 2016-2026 and a joint statement were also released.

Iranian President Hassan Rouhani arrived in Bishkek Thursday night as the last leg of his three-nation Eurasian tour that kicked off on Wednesday. Rouhani’s previous destinations were Armenia and Kazakhstan.