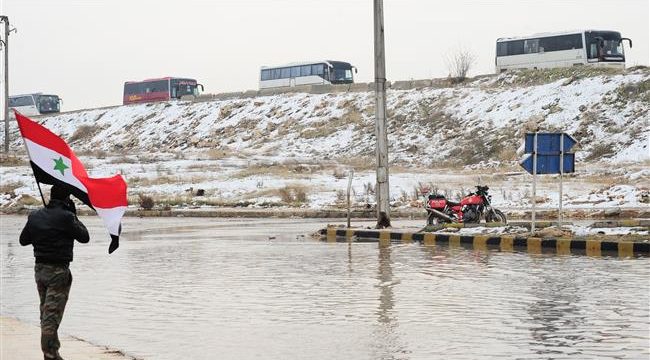 Press TV- The Syrian army says Aleppo has fully returned to government control after the last batch of civilians and militants were evacuated from the northwestern city.

“Thanks to the blood of our martyrs and the sacrifices of our valiant armed forces as well as allied forces… the general command of the armed forces announces the return of security to Aleppo after its release from terrorism and terrorists, and the departure of those who stayed there,” the army said in a statement.

The statement further praised the victory in Aleppo as a “strategic transformation” in the nation’s battle against terrorism.

“The restoration of security and stability to Aleppo is a victory, which constitutes a strategic juncture and important turning point in the fight against terrorism, on the one hand, while dealing a blow to the terrorist project and its supporters, on the other hand,” it said, adding, “This great achievement will be a strong incentive to resume the national duties and eliminate terrorism and also restore security and stability to the entire homeland.”

The statement came after the last convoy carrying militants and their families left Aleppo on Thursday night, paving the way for Syrian forces to retake full control of the city, Syria’s television said.

It added, “The last four buses carrying terrorists and their families arrived in Ramussa,” a district south of Aleppo, which is under the control of government troops.

The eastern sector of Aleppo was among the first areas that fell to the Takfiri militants following the outbreak of the foreign-sponsored crisis in the country.

Since then, a mission has been in motion to move the last remaining civilians and armed groups from the formerly militant-held areas of the strategic city.

The UN-backed process was part of ceasefire agreement mediated by Russia and Turkey, which support opposite sides of the conflict in Syria. The deal gives the Syrian army gives full control of Aleppo after years of fighting against terrorists.

Earlier in the day, the UN and other sources on the ground said the evacuation process was in its final phases.

Some 35,000 people, including both civilians and militants, were moved out of eastern Aleppo, according to the latest UN figures. The world body had also deployed 31 observers to oversee the last stages of the evacuations.

Last week, Syrian President Bashar al-Assad praised the liberation of Aleppo as “history in the making.”

Aleppo’s liberation is seen as a crushing blow to the militants and their foreign supporters, who have been actively working to topple the Damascus government since March 2011.

President Assad has hailed the battlefield gains as a “basic step on the road to ending terrorism in the whole of Syrian territory and creating the right circumstances for a solution to end the war.”