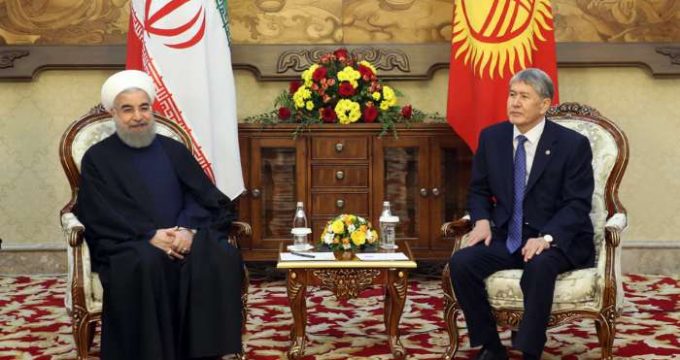 Rouhani made the remarks at a Friday joint press conference with his Kyrgyz counterpart Almazbek Atambayev in Kyrgyzstan’s capital city of Bishkek.

“Since Kyrgyzstan is a member of the EAEU, relations with Kyrgyzstan and the whole EAEU can affect our economic ties, and we hope that the union will take proper decisions in this regard during its meeting on September 26, [2016],” Rouhani said.

The Iranian president further pointed to the two countries’ plan to revoke the visa regime in three phases for business purposes, tourism and other ordinary trips, respectively.

Rouhani welcomed Atambayev’s proposal to connect China, Kyrgyzstan, Uzbekistan, Turkmenistan and Iran through a railway linking the region to the Sea of Oman, Persian Gulf and the Indian Ocean.

He also expressed Iran’s preparedness to transfer technical and engineering services to Kyrgyzstan and cooperate with the country in different areas, including countering terrorism, narcotics and organized crimes.

Atambayev, for his part, lauded the close stances of both countries on different international issues.

The two countries condemn terrorism in all its forms, said the Kyrgyz president, adding that no one has the right to attribute terrorism and extremism to a nation or religion with the aim of inciting Islamophobia.

He also expressed support for full membership of Iran to the Shanghai Cooperation Organization (SCO) and noted that Tehran’s potential can promote the international Kudos of the SCO.

Rouhani arrived in Kyrgyzstan on Friday on the final leg of a Central Asia tour that already took him to Armenia and Kazakhstan.