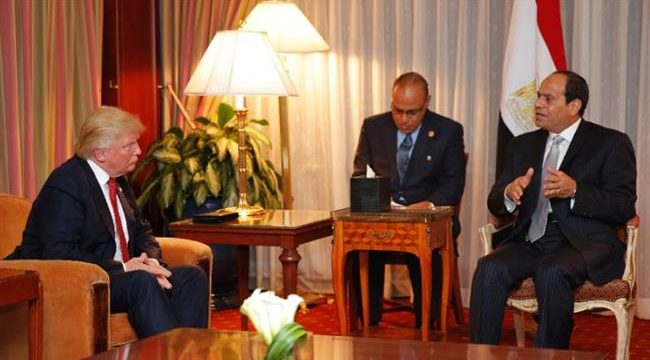 “The phone call touched on the draft resolution before the United Nations Security Council on Israeli settlements,” a statement from Sisi’s office said on Friday.

“The two leaders agreed on the importance of giving the new administration a chance to deal comprehensively with all the aspects of the Palestinian cause to achieve a comprehensive settlement,” it said.

On Thursday, the Security Council was to vote on the Cairo-proposed resolution, which would call on the regime in Israel to stop its settlement construction in the occupied Palestinian lands.

However, Cairo abruptly requested for the voting session to be postponed after Tel Aviv went on a last-ditch lobbying campaign against the resolution.

Reuters quoted two Western officials as saying that the outgoing US administration intended to allow the 15-nation council to approve the resolution, prompting the Tel Aviv regime to reach out to Trump.

Trump, meanwhile, minced no words in divulging the American UN mission’s plans in case of a vote. “The resolution being considered at the United Nations Security Council regarding Israel should be vetoed,” he said in a statement.

Amid Egypt’s dawdling, New Zealand, Venezuelan, Malaysian, and Senegalese missions to the UN gave Cairo an ultimatum on the issues.

They sent a note to their Egyptian counterpart, saying if Cairo did not clarify whether it would call the vote by midnight, the deadline for the call, they might resort to their right to table the draft.

“In the event that Egypt decides that it cannot proceed to call for vote on 23 December or does not provide a response by the deadline, those delegations reserve the right to table the draft … and proceed to put it to vote ASAP,” the note read.

The US, Tel Aviv’s oldest and strongest ally, has unswervingly backed the regime at the world body since its creation in 1948 in the face of all international momentum against its acts of aggression against Palestinians.

This includes its refusal to stand in the way of Israel’s unbridled settlement expansion, which have invariably shattered all previous diplomatic pushes towards the resolution of the Palestinian-Israeli conflict.

Trump had campaigned on a pledge to recognize Jerusalem al-Quds as Israel’s capital. This is while Palestinians want the West Bank, which Israel has occupied since 1967, as part of a future Palestinian state, with East al-Quds as their capital.

There has, meanwhile, been speculation that the incoming US administration may decide to move the American embassy to East al-Quds in a sign of the recognition.

Friedman is notorious for his fervent support of Israel’s illegal settlement expansion in the occupied territories, and has been characterized as an “obstacle to peace” by successive US administrations.