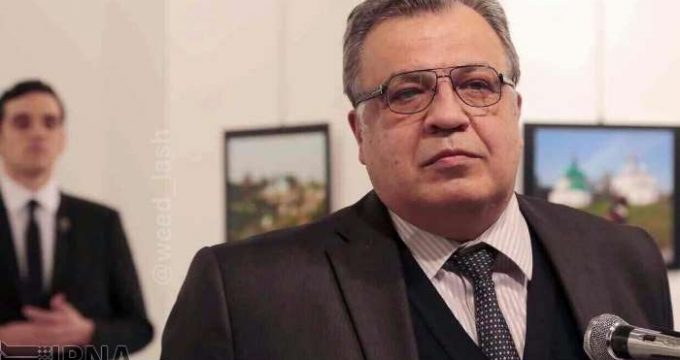 Iranian Diplomacy- The assassination of Russian ambassador to Ankara demonstrated that the liberation of Aleppo was greater in scales that we already knew.

The liberation of Aleppo has been so heavy for the opposing front that gets a foreign ambassador assassinated by a security force in the hosting country in front of cameras and even worse as the assassination is praised.

Dust in the region from the beginning of the Syrian crisis is now settling. A large part of public opinions in the Middle East refrained to take positions and sides in the crisis over the past three or four years. However, it is easily taking sides with one of the fronts involved even if its moves are true embodiments of terrorism.

The divide has gone so far that one side stands clapping hands for the assassination of a diplomat while another deems it a manifest act of terror.

One example is Lebanese journalist Jerry Maher, who called the assassin “a young dandy fallen martyr” in a tweet that earned more than a thousand favstars and retweets. Another Twitter account named Malghouf, called the assassination an everlasting charity and the assassin a martyred hero, wishing him a place in heavens. This second tweet also gained about 2 thousand shares and likes.

The assassination of the Russian ambassador demonstrates how significant the liberation of Aleppo was. It indicates how delusional and confused are the minds of some people in the region, overwhelmed by untruthful propaganda and what a big threat this delusion and confusion poses to the region. Those living for almost six years on a promise by Erdogan, backed in turn by Saudi Arabia’s media empire, to say prayers in Umayyad Mosque of Damascus, are now facing the reality in which they cannot even have the Umayyad Mosque in Aleppo and cannot stand seeing their dreams going with wind.

The Turkish President cannot clear himself from the assassination by condoling Vladimir Putin or accepting Moscow’s involvement in consequent investigations.

The assassin comes from Aydın, a city in the western Turkey and has no links with Kurds in the east or southeast so that he could be identified as a member of Kurdistan Workers’ Party (PKK). He was one of the thousands of individuals who were interrogated following the coup attempt in Turkey and his interrogators have concluded that he had no links with Gulen’s supporters. Apparently, he was a trusted security force who had been on several security mission during the Turkish President’s addresses. He has also been involved in the ruling Justice and Development Party and is therefore part of Erdogan’s establishment.

More important is the signature of the Russian ambassador’s assassin down the page. The poem he read immediately after unloading his pistol in Andrey Karlov’s back was the signature Erdogan threw at his addresses after the fall of Mohamed Morsi’s government. The line was the beginning of a poem that Muslim Brotherhood members backed by Ankara sing in their official meetings. It was for the Brotherhood that Turkey officially called the incumbent Egyptian President a putschist, fueling several tensions with other countries in the region.

The tumultuous situation in the region is the result six years of deceitful propaganda by Turkey, Saudi Arabia, and Qatar led by the US against Syria, Iran, and Russia. Those brainwashed think Syria has become the bloodbath of Muslims as the assassin of the Russian ambassador perceives himself to be on an oath of allegiance with the messenger of God to take revenge for Muslims killed in Aleppo.

With its chaotic security status, Turkey should cease the current duality instead of following US policies. It should stop supporting terrorist groups it calls ‘moderate opposition’ and go back to its policy of ‘zero problems’ with neighbors.

On the other hand, Russia should have learned from experience. Russia’s pilot and ambassador easily get killed while Erdogan only apologizes and extends his hand of friendship after a while. Ankara and its allies simply manipulate Russia’s simplemindedness and pass their resolution to allow monitors in Aleppo, evacuating thousands of terrorists to another location in the Aleppo province or Idlib to be used later against Damascus and Moscow.

It is time for Russia to take the option called political talks off the battle table, where resistance is everything. Instead, it should view those who advocate this option with distrust and cynicism if it wants to help realize the goals of resistance and the interests of people in the region, just in the same way Aleppo was liberated after four years of resistance.