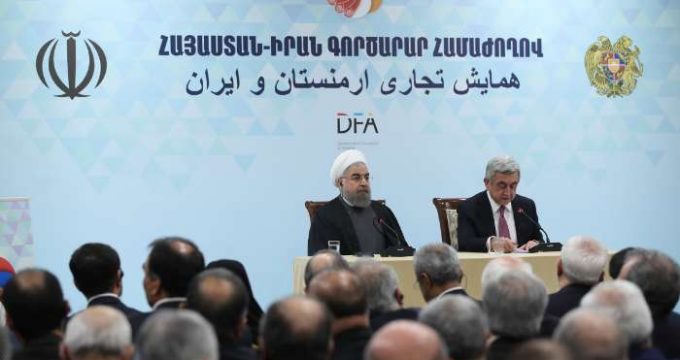 Tehran, Yerevan to cooperate in swap of Turkmen gas to Armenia

SHANA- President Hassan Rouhani said on Wednesday that Tehran and Yerevan have voiced willingness for swap of Turkmen gas to Armenia.

Addressing a joint press conference with his Armenian counterpart Serzh Sargsyan, President Rouhani said Iran and Armenia will also cooperate in electricity exchange and completion of the third transit line.

He said Armenia and Iran can complete the transit route between Persian Gulf and the Black Sea. “We can link the Black Sea to Persian Gulf via roads and railways through facilitation of trade and economy for people of the region and other parts of the world.”

Sargsyan in turn referred to talks between Iran and Armenia for energy and transportation cooperation and said agreements reached between Armenia and Iran in gas and electricity will be enforced.