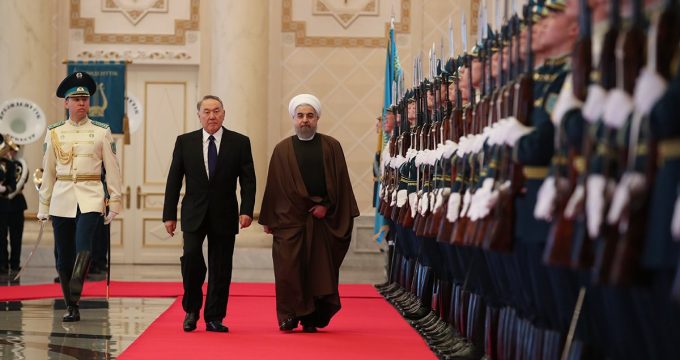 IRNA – Visiting President Hassan Rouhani was officially welcomed by his Kazakh counterpart Nursultan Nazarbayev at his presidential palace in Astana on Thursday morning.

The two presidents are to discuss issues of mutual interest and ways for fostering all-out ties in a joint meeting held after the ceremony.

President Hassan Rouhani arrived in Kazakhstan on Wednesday night on the second leg of his tour to three regional countries which would later take him to Kyrgyzstan.

On the first leg of his regional tour, the president visited Armenia where he met his Armenian counterpart Serzh Sargsyan.

During his visit to Yerevan, Rouhani attended a meeting of top-ranking delegations of the two countries. He also participated in a joint conference of economic activists of Iran and Armenia.

Iranian and Armenian officials signed five cooperation documents in the presence of the two presidents.