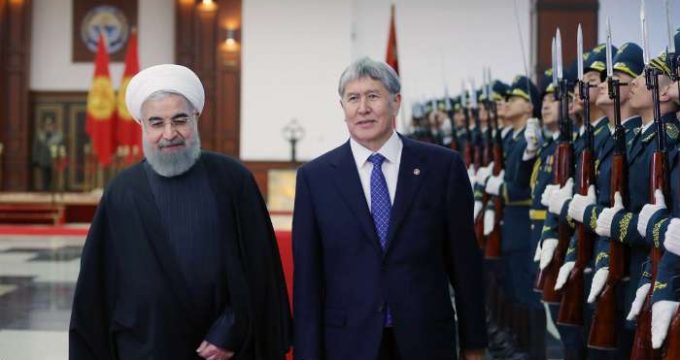 IRNA – President Hassan Rouhani heading the Iranian delegation, arrived in Kyrgyz capital Bishkek on Thursday afternoon, and was welcomed by his Kyrgyz counterpart Almazbek Atambayev at the airport.

According to the Presidential office, President Rouhani is in Bishkek on the last leg of his regional tour aimed at developing and strengthening ties with the Islamic Republic’s neighboring countries.

In the official welcoming ceremony, the national anthems of both countries were played and the two Presidents were received a ceremonial parade and then the delegates of the two sides were introduced to each other.

Talks between the two Presidents and their high ranking delegations will be kicked off on Friday.

They are also expected to sign several Memorandums of Understanding on expansion of mutual cooperation between the two nations.