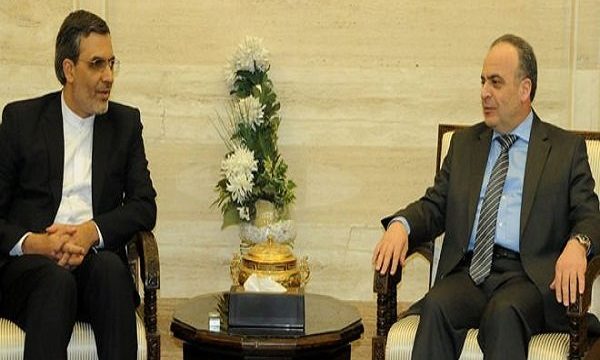 “This is a victory for the resistance axis,” said Syrian Prime Minister Emad Khamis on liberation of Aleppo, in his Wednesday meeting with Iranian Deputy Foreign Minister, Hossein Jaberi Ansari, who is visiting Syrian capital city of Damascus, “and all our victory is to do our duties owed to the blood of the martyrs.”

Mr. Khamis reiterated that the victories of the Syrian forces in Aleppo and other regions of Syria had foiled the American-Western plots for the region.

“The historically rooted economic and political relations between the Islamic Republic of Iran and the Syrian Arab Republic demand more efforts to level the economic ties with political and historic relations of the two countries,” highlighted the Syrian premier.

He called for a cooperation perspective which would ensure the interests of both countries especially in areas of economy and production.

The Iranian diplomat, Hossein Jaberi Ansari, for his part, voiced content and offered his greetings to the people and government of Syria over the victory of the Syrian forces in retaking and liberating the historic city of Aleppo

“The relations between the Islamic Republic of Iran and the Syrian Arab Republic have always been special and unique as we have always held strategic ties,” affirmed the Iranian visiting diplomat who arrived early on Wednesday in Damascus.

He urged for efforts to expand bilateral relations while tackling the economic challenges of the relations at the same time.

The bilateral meeting of the two officials was also attended by the Syrian Deputy Foreign Minister Faisal Mekdad, and Abdulreza Ghasemian the chargé d’affaires of the Islamic Republic of Iran’s embassy to Damascus.