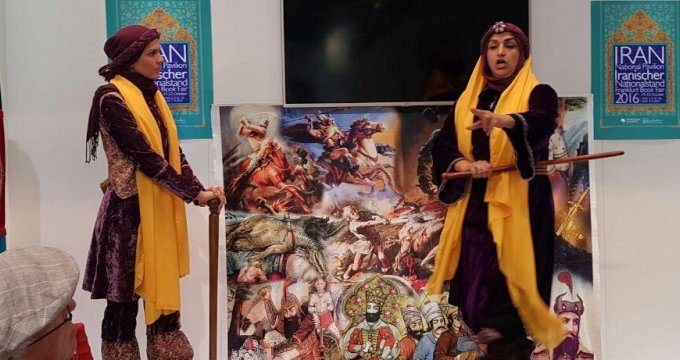 Poetry and Naqali for ‘Shab-e-Yalda’

Financial Tribune- On the occasion of ‘Shab-e-Yalda’ (Yalda Night), the longest night of the year (December 20) which is celebrated nationwide in Iran, a ceremony was held at the Rasam Arabzadeh Carpet Museum in Tehran on Sunday, December 18.

Organized by the museum and Shahnameh Scholars Club, the event included a variety of programs from ‘naghali’ (traditional Iranian story-telling) and poetry reading to music performance and book unveiling, the club’s website reported.

The naghali session was rendered by artist Sara Abbaspour, who has also given performances at several naghali events across Iran and in Italy and France. More recently, she performed at the 61st International Belgrade Book Fair, Serbia, and the 68th Frankfurt Book Fair, Germany in October.

Iranian story-telling tradition is the narration of important stories from Iranian fables, myths and epics mentioned in the most important books of ancient times. It is usually performed before a huge cloth or canvas hung on the walls, on which are painted the events of the story being told by the ‘naghal’ or story teller.

Stories are mostly taken from the tales mentioned in the globally-acclaimed 10th century Persian poet Ferdowsi’s epic book Shahnameh (Book of Kings). The naghal plays the roles of different characters with special tone, feelings and expressions.

An interesting part of the night was a performance of naqali and Shahnameh recitation by two young siblings Mahdis Karamipour, 13, and her younger brother Mahbod, 8. The siblings narrated stories from the Shahnameh in both Persian and English.

Viana Parvizian, a 9-year-old girl, also recited some verses from the epic poem.

The event also unveiled a book written by the veteran Shahnameh scholar Abolfazl Khatibi titled ‘Did Ferdowsi Satirize Mahmoud of Ghazni?’ which is an analysis, criticism and commentary on the satire attributed to Ferdowsi.

ýKhatibi, 77, is a senior researcher at the Academy of Persian Language and Literature, and has published several books and articles especially on Shahnameh.

‘Shab-e-Yalda’ is an ancient Persian festivity marking the last day of fall, a celebration of winter solstice. Persians all around the world gather with friends and family to celebrate the night.

As a tradition, Iranians welcome each other usually at the home of the elders who read poetry from the two famous Iranian poets, Hafez and Sa’adi. Watermelon, pomegranate and dried nuts are the most common foods served on the night.

Other countries such as Afghanistan, Tajikistan, Uzbekistan and Turkmenistan also observe the event.