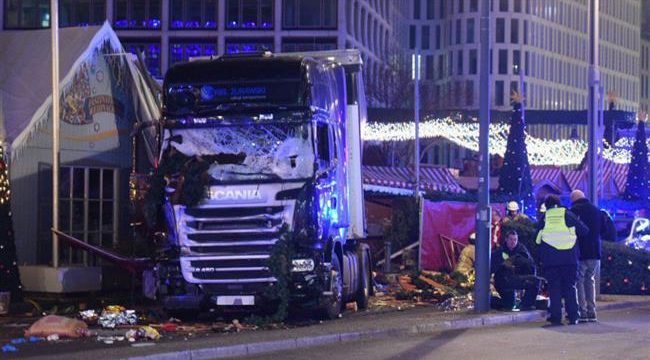 The New York Times– The German authorities began an intensive hunt on Wednesday for a Tunisian man whose papers were found inside the truck that plowed into a Berlin Christmas market on Monday evening, according to German news accounts.

Officials have yet to discuss the manhunt publicly, and it was not clear what role, if any, the Tunisian man might have played in the attack. On Tuesday morning, the authorities announced that they had arrested a 23-year-old Pakistani man who had applied for asylum in Germany as a suspect in the attack. But at the end of the day, the police released him, citing a lack of evidence.

What led the German authorities to seek the Tunisian man was an identity document found inside the truck, according to the newspaper Süddeutsche Zeitung and the public broadcasters NDR and WDR. The documents were said to show that he had been allowed to remain in Germany but that he had not been granted full asylum.

The papers indicated that the man was born in Tataouine, a desert town in southern Tunisia, in 1992, the news outlets said; they identified him only by his first name and an initial, Anis A., Der Spiegel reported.

The Tunisian man was recorded as having entered Italy in 2012. He came to Germany in July 2015 and applied for asylum in April this year, receiving papers that allowed him to stay temporarily. He lived in North Rhine-Westphalia, Germany’s most populous state, and in Berlin, according to Süddeutsche Zeitung.

An official in Kleve, the town near the Dutch border where the Tunisian was reportedly registered, said she was not authorized to release any information about the man, citing privacy laws and the continuing investigation.

According to Süddeutsche Zeitung, the Tunisian man had lived in the city of Dortmund with a man named Boban S. who has been arrested and accused of involvement with the Islamic State.

Boban S., in turn, is reported to have connections with a 32-year-old Iraqi who goes by the name Abu Walaa and whom the authorities arrested on Nov. 8.

Known as “the man with no face” because he often preached in Arabic and in poor German with his back to the camera, the Iraqi man was identified by officials only as Ahmed Abdulaziz A. He made his base in Hildesheim, a city of 100,000 south of Hanover, where he drew an increasingly devoted following and even offered his own app in 2014.

He was charged with recruiting terrorists and openly supporting the Islamic State, which is also known as ISIS or ISIL.

In a country where laws and traditions strongly emphasize personal privacy, the identities of the victims of the Berlin attack have barely begun to emerge.

One of the victims was a 65-year-old woman from Neuss, a city in North Rhine-Westphalia, according to news reports.

Fabrizia Di Lorenzo, an Italian transportation specialist who has been living in Germany for three years, has been missing since Monday, and her father, Gaetano Di Lorenzo, said he feared the worst.

“We are here with my wife, waiting for the DNA results,” he said in an interview with the Italian daily Corriere della Sera. “We are waiting for confirmation, but I am not deluding myself.”

The daughter’s cellphone and transit pass were found near the scene immediately after the attack, her relatives and friends said Tuesday on social media.

In Israel, Prime Minister Benjamin Netanyahu said that the attack “may have claimed the life of an Israeli citizen.” He was referring to Dalia Elkayam, who has been missing since Monday and whose husband, Rami Elkayam, was seriously injured in the attack.

The first victim of the attack was a Polish truck driver, Lukasz Urban, 37, who had a wife and young child, and who was found dead in the cab of the truck. He had been stabbed and shot by whoever carried out the attack.