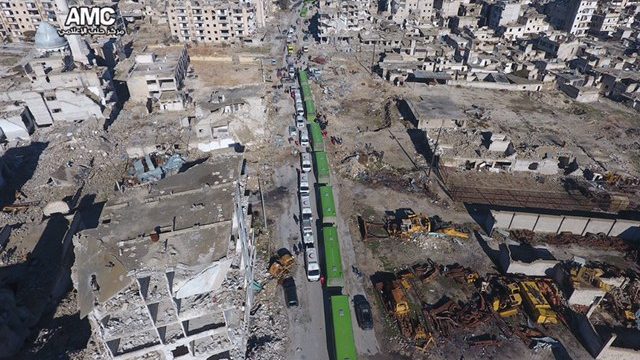 Spotting propaganda, disinformation, and fraudulent arguments on the Aleppo front

American Herald Tribune|Kim Petersen: Independent journalist Eva Bartlett (fresh from a videotaped exchange in which she skewered a befuddled Norwegian Aftenposten journalist) was invited onto RT Live for a debate with Dilly Hussain, deputy editor of 5PillarsUK, about the situation in Syria, with a focus on Aleppo.

The debate was extraordinary for the professionalism of Bartlett and Hussain’s lack of dignity and professionalism, as well as poor moderation by the unnamed RT personality. (I inquired of RT regarding the moderator’s name on 17 December but did not hear back before publication.)

Why is Hussain unprofessional? Because he engaged in ad hominem attacks on Bartlett and also against the media outlet he was appearing on. He serially interrupted Bartlett while she presented her facts (and Bartlett, after pleading for the courtesy to make her points uninterrupted, finally — out of apparent exasperation — interrupted Hussain, albeit on far fewer occasions).

First, ad hominem should have no place in any discussion. It is irrelevant to the facts of the matter, and it should serve as a loud warning that the name caller has a poor grasp of the facts or, even worse, wishes to present a case he knows is contrary to the facts. Second, interrupting an opponent is not only extremely rude, but it is underhanded in that it serves as a device to throw off the opponent: causing a pause in the flow of an opponent’s argument, the loss of a train of thought, unnecessary repetition, or causing an unwary debater to become flummoxed and unfocused. These tactics of Hussain are rude, unethical, and speak poorly to his ability to persuade viewers with the command of his facts.

Early on Hussain cast aspersions at Bartlett and his host, RT:

Hussain does not state how Bartlett lacks in quantity and quality to be a journalist. Hussain seems assured of his journalistic integrity since his bio tells of his NCTJ Certificate in Print Journalism in 2010. But what kind of journalist reveals an animus by berating a colleague, even if he refuses to recognize her as such? Moreover, if he lacks essential journalistic debating qualities, would his certificate have any substantive value?

The website, 5PillarsUK, where Hussain edits, claims to be independent:

Everything so far has been financed from our own personal savings, reader donations and advertising.

… We do, however, aim to raise money for this site through advertising and through individual grants and donations which won’t impinge on our editorial freedom. [Italics added]

One wonders: how does accepting advertising money equate to financial independence? Academics Edward Herman and Noam Chomsky in their Propaganda Model posited advertising revenues as creating a conflict of interest. It is conceivable, however, that 5PillarsUK only accepts advertising that would not impinge on their journalism.

Early on, Hussain tried to bulldoze the debate over Bartlett; the RT moderator had also interrupted Bartlett once and stood back and allowed one guest for too long to try imposing himself over the entire debate. When the moderator finally spoke up, Hussain objected. This was shameful. Does fair play and any semblance of etiquette go out the window because it is a TV debate? Do viewers not deserve to hear, undisturbed, the arguments put forth by all guests equally?

Hussain’s frequent interruptions made me think of über-Zionist Alan Dershowitz and how he tried to monopolize all the speaking time in a debate with Norman Finkelstein who exposed Dershowitz as a fraud and plagiarizer. It appeared to this viewer that Dershowitz was running scared. Bartlett ostensibly recognized the same as she accused Hussain of “Zionist tactics.”

Hussain, who relies on Tweets from British aid workers and videos purportedly from Syria which he analyzes from his base in Britain, had the audacity to question Bartlett’s sources. Hussain would be wise to be more skeptical to NGOs. Médecins Sans Frontières has even been accused of being involved in people-smuggling.

Barlett who had been on the ground on four occasions in Syria, including Aleppo and had interviewed Syrians while there, named her sources. Bartlett, appearing very conversant on the situation, answered every query from Hussain.

The moderator, however, equated the British social media sources of Hussain with the on-the-ground Syrian sources of Bartletts saying, “… there are two very opposing perspectives and they are quoting different sources which are very hard to verify in all cases…” Really? Bartlett’s sources have names, so one assumes that one can go and find the person and check. It is a little harder to verify a Tweet, but Hussain did provide names later in the debate.

I know when I see news about Russia, I mean about Syria from Russia Today or from Press TV, I know that they are merely pushing propaganda to protect the Assad regime…

When challenged by the somewhat indignant moderator, Hussain offered:

This is a baffling statement from someone who identifies himself as a journalist. One wonders how that speaks to the points he made in the debate?

Bartlett, according to Hussain, has no trustworthiness. “She is an Assad regime apologist,” he charges.

There is a certain pathos in a person who derides another person’s credentials as a journalist while relying on Tweets and British aid workers. Douglas Valentine, an expert on the CIA, wrote, “… the modern AID worker is a highly indoctrinated fanatic.” Furthermore, “… AID programs provide cover for the CIA and are symbolic of the evil intentions that lurk behind the righteous US façade.” (Douglas Valentine, The CIA as Organized Crime: How Illegal Operations Corrupt America and the World, Clarity Press, 2016: p 370.) Tweets have a place, sure, and some NGOs might be untarnished. Yet Hussain claims a certainty in his sources. He uses words such as “unequivocally” and “absolutely,” as if such words verify his claims. But how do Tweets and videos stack up against speaking to people on the ground, people who live in the region, and witnessing for oneself what is transpiring?

Although the beleaguered moderator tried to steer Bartlett in another direction, Bartlett demanded to address claims made by Hussain. She then hoisted Hussain on hos own petard by pointing out that although he said UN statements ought to be taken with a pinch of salt, his own allegations of Russian massacres of Syrian civilians stemmed from UN officials.

Hussain tosses away any pretense to be a gentleman when he chides Bartlett: “Eva has no humanity, has no conscience.” Through all these attacks on her person, Bartlett kept her composure.

She also had to deal with a moderator who seemed to be saying that there could be two truths: one for either side. Again the moderator opined, “… basically you got two sides throwing around accusations, very pointed ones, and then also backing it up with very questionable sources…”

Hussain’s partiality comes through clearly to this viewer in his willingness to lambaste Saudi Arabia for war crimes in Yemen, but he does not lambaste Saudi Arabia, Qatar, Jordan, Turkey, the US, Canada, Israel, Britain, France for their war crimes in Syria. His criticism focuses on Russia, Iran, and Hezbollah, although he allowed that and everyone, including the US and Britain, has used Syria “as a chess game.” This is patently biased and consequently propagandistic. He claims that he sees no difference between Russia in Syria and the US and UK in Iraq and Afghanistan? What Hussain does not consider is that had the US, Qatar, Saudi Arabia not been instigating “regime change” in Syria in the first place, there would have been no reason for Syria to request help in defeating the mercenaries and terrorists. Colleague BJ Sabri and I put forth the argument:

It is also important to note that if the US regime and its anti-Assad instruments had not participated in the aggression against Syria, then there likeliest would have been no Russian involvement, and Syrians might have been able to settle the matter for themselves. Logically, any blame for casualties resulting from Russian military involvement must be directly attributed to the anti-Syrian regime coalition—it is the law of action and reaction. In the end, we see that the ultimate culpability for all those who died in Syria rests exclusively with those who initiated the violence in the first place.

As Bartlett pointed out: Russia, Iran, and Hezbollah were invited by the government of a Syria to assist in combatting terrorism. A legitimate response for any sovereign nation. That was not the case in the invasions of Iraq and Afghanistan. The US and UK engaged in “regime change” in those countries. Russia and Iran are not seeking any change of government in Syria.

RT presents viewers with the four times on-the-Syrian-ground Eva Bartlett and sitting-in-Bedford-UK Dilly Hussain. And we are asked to choose between the sources of these two people. It seems a no-brainer. For this viewer, Bartlett put another journalist in his place, although in this case, Hussain did much of the damage to himself.

To conclude, Hussain appears duplicitous on critical issues. His suspicious ambivalence on Saudi Arabia, his adversarial stance toward Russia and Syria without valid reasons, his boorish attitude toward Bartlett, as well as poor arguments suggest that he is driven by an agenda whose origin is not clear. I do not want to be harsh, but from watching the way he tried to impose his views on the debate, he appears to be a classical opportunist seeking undeserved fame. Effectively though, whatever he thinks of himself, Hussain appears to lack the essential command of facts. Consequently, spotting the fraudulent arguments that he was defending should be a priority for all those who follow the American-Saudi-Turkish-Qatari war on Syria.

I would be surprised to see Hussain back on RT again.