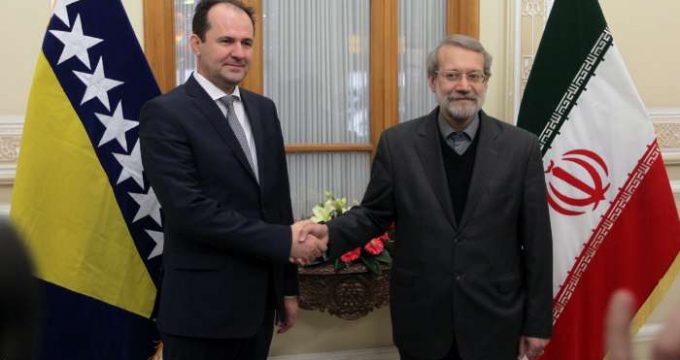 Larijani made the remarks after meeting Bosnia-Herzegovina House of Representative Speaker Sefat Suftic in Tehran on Tuesday.

“During our negotiations, we agreed on methods to expand economic relations and remove certain obstacles in this field,” Larijani told reporters in a joint press conference with Suftic.

Noting that he and Suftic have also discussed development of scientific and cultural cooperation between the two countries, he said, “We also had some discussions on the regional problems and we shared common views in this regard.”

Suftic, for his part, stressed that new conditions and capacities exist in the two countries which can further improve relations between Iran and Bosnia and Herzegovina.

Iranian Ambassador to Sarajevo Mahmoud Heydari and member of Bosnia-Herzegovina Presidential Council Mladen Ivanić in a meeting in the Bosnian capital last month had also underlined the need for the expansion of mutual cooperation in different areas.

During the meeting in Sarajevo, Heydari and Ivanić explored avenues for bolstering and reinvigorating of bilateral relations.

During the meeting, the Iranian envoy said that Iran has always supported Bosnia’s sovereignty and unity.

Heydari pointed to removal of Iran’s sanctions, and said, “The ground is now ready for promotion of trade ties between the two countries.”

Ivanić, for his part, pointed to the historical and cultural commonalities between Iran and Bosnia and urged promotion of economic, trade and tourism ties between the two countries.

“Terrorism, extremism and violence are serious dangers for the world and fighting them needs collective collaboration,” he added.