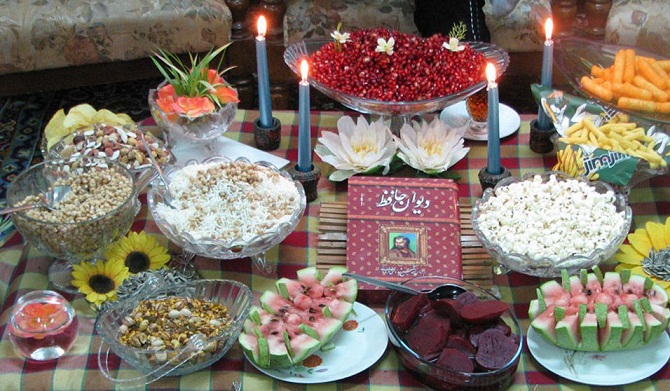 Press TV- Yalda is the name by which the longest night of the year is known in Iran. Iranians mark the end of autumn and the advent of winter in one of the most celebrated national events.

In public belief, the night of the last day of the Persian calendar month of Azar – this year it falls on December 20th – harbors the eventual victory of light over darkness. Ancient Iranians celebrated this night for the birth of Mithra, the goddess of light. After Yalda, the days will grow longer and the nights will fall shorter.

As per tradition, Iranian families get together in the houses of their elderly relatives, most often grandfathers and grandmothers, and spend the better part of the night socializing and feasting on the occasion’s special delicacies.

It is widely believed among Iranians that if they consume summer fruits on this night, it is less likely that they will get ill in the coming cold season. Hence, an abundance of fruits, particularly watermelon and pomegranates, is served at the gathering. A bowl of special nuts is also a must on the Yalda night. Often, a traditional dinner is offered to the guests present at the event.

Traditional and classic poetry and old mythologies are definitely part of the event with a few members usually reading to the rest.

A significant book read on this occasion is the poetry book of Hafez, the celebrated Iranian poet of the 14th century AD. Usually, each family member makes a wish and randomly opens the book of Hafez and reads it aloud. That specific poem is known to express the interpretation of the wisher’s hopes and beliefs. This is believed to link the aesthetic side of this night to a more religious side, when people pray and hope for fruitful days in the coming winter.

The Yalda night is also celebrated at this time of the year in several neighboring countries, including Afghanistan, Tajikistan, Uzbekistan, Turkmenistan and some Caucasian states such as Azerbaijan and Armenia.