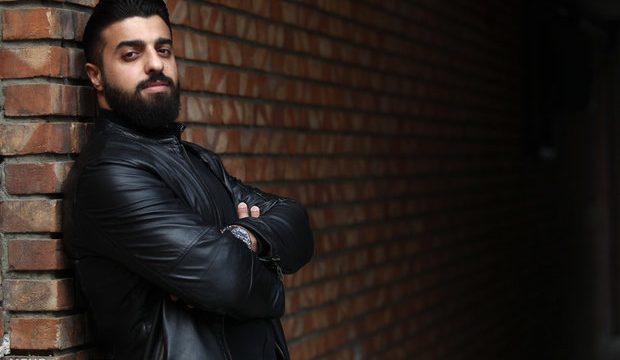 Ali Al Hadi is a Danish Muslim musician and singer at age of 25 which promises a bright future ahead of his career with the success he has already achieved so far. As a Muslim singer, his concern is to contribute to and promote Islamic music to be consumed by especially the young generation of Muslims.

While the annual Islamic Unity Conference gathers here in Tehran hundreds of scholars, figures and activists from all over the world who work to help unity among Islamic sects, this year the event was different in the way that they invited Ali Al Hadi to sing a special song on the occasion of birth anniversary of Prophet Muhammad. Here is our interview with the Danish-Lebanese young artist.

Let’s start with a short biography of you and when your musical career and background started?

Since I was a kid I used different instruments and when I grew up I studied learning it more seriously and Alhamdulillah I ended up in a professional way; it began when I was about ten years old when I found some interest in music which helped me with learning the piano and I become better and better thanks to God. Now sitting here today with some artistic works in my background.

How is the situation of your work as an Islamic singer in the world of west?

It is quite difficult as you have many western media going on and of course broadcasting not Halal works, from the viewpoint of Muslims. We also face a big war against the Muslims through the media and especially through music. Music is an art and the west is using it to get close to the Muslim youths. We are trying thus to give the youth something similar in quality, but different content; so we try to make it as western as possible and meanwhile as Islamic as possible.

How is the reception for your works among the audiences?

Until now, very good. Alhamdulillah people are getting the artistic work as something good and we have had many people telling us they liked the songs and that if there are more of such works they will also tell people around them to listen to these works and won’t listen to western non-Islamic music anymore. Which other countries have you had performances and how did the audience like it?

I have so far sung in Lebanon, Germany and Sweden where they like it. Some media in Lebanon covered the event too.

You performed a new song in Islamic Unity Conference on Thursday; can you explain about that piece of work and how it was created?

When invited to the event we decided to do something new which can be multilingual. We started with the English part and asked the writer to get inspiration from Ayatollah Khamenei’s letter to the western youths and she did so. We wanted something that the youth can related to. The Arabic part was like continuation of the English part, and the Persian part is more like traditional. It is western style music with an Arabic or Middle Eastern melody and with English words; so it is easy for the Muslims to relate to, both musically and the lyrics. It tells the story of a person who feels confused in this world and then finds peace by finding the love of Muhammad (PBUH) and that’s the main idea behind the song we were working on.

Can you read parts of the lyrics? I want to know how it is attributed to Prophet Muhammad?

It took me years to face my fears

Lost many days to find the ways

The world around me is confused

And scattered and the solution is love

Who was this man that spoke the truth?

I walked different paths during my youth

Until one day a name entered my ears

A name so unique, it brought me to tears

Muhammad I heard, Muhammad they said

(I testify that Muhammad is Messenger of Allah)

I should also add that if you look at the last part of the Ayatollah Khamenei’s letter, it says if you are confused about the world and your way go to Ahl al-Beit, the Household of the Prophet Muhammad. Read about them, read about who they are, how they lived and what they said and get the answer from them. That’s why we say from there we got our inspiration.

Recently more Muslim musicians and singers are appearing internationally singing about Islam; how do you see the situation and what do you feel about it?

I found as a Shia Muslim there is an empty space between the Shia and an Islamic icon the youth can relate to and we try to fill this gap. We of course do believe in unity among Muslims, but we need an icon Shia youth can connect to I personally set my goal to make the youth remember we have Imam Zaman (Imam of the Age) with us, he is around us and remember that he will come someday. This is the main goal of my work to remind the audience of Imam so that the youth can relate to him as an Islamic Shia icon. How much should be done in Islamic music?

Actually we do need much more support from the people in charge and officials; as artists we need supports from people, from governments, from leaders, from everyone. Because as Muslims, normally I’m talking about Arab world and not western world, we see that Muslim artistic work is not taken so seriously as we want to.

Can you talk more on the life in non-Muslim societies and if you face difficulties?

It is difficult to be in a western lifestyle; there is also a campaign against Islam there. Of course the government is neither supporting Muslims, nor chasing them. We are free and we follow our religion as far as we go with the law; Denmark, however, follows the United States in many things, but in Copenhagen where I live people are very open-minded, and you don’t find the Islamophobia you see outside Copenhagen, where they don’t know Islam and so they fear about it. Normally Danish people are open-minded and against Islamophobic works and only a small part of the society campaigns against Islam.

How about Islamic centers activities? How much does the government support and how do Sunnis and Shias relate to each other?

We have Imam Ali Foundation and Shia Muslim Cultural Center where my father happens to be Imam of it. Of course there are many more mosques and centers both for Shias and Sunnis. But we do need more support for centers and their activities as we have to do a lot to prove ourselves to be supported by the government. Between Shias and Sunnis we are good Alhamdulillah; heads of mosques and centers believe and work in favor of unity among Islamic sects and myself as a musician use my art in this regard. We have good relations with other Muslims, Christians, etc. and we see each other as humans and respect each other and each other’s beliefs.

Ali Al Hadi’s page on Facebook can be reached HERE and his video clips can be watched on his YouTube channel HERE.