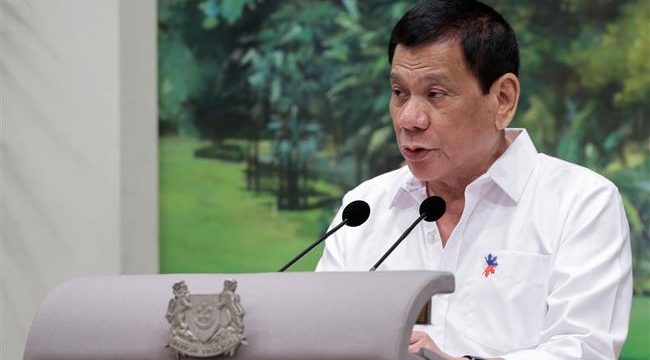 Press TV- Philippine President Rodrigo Duterte says “bye-bye America” while threatening to halt an agreement with Washington over US troops visiting his country.

Duterte made the threat on Saturday in reaction to what he deemed was a US move to halt a major aid package to the Philippines over human rights issues.

Earlier in the week, a US government aid agency, the Millennium Challenge Corporation, announced that its board of directors had deferred a vote on a renewal of the aid package over “concerns around rule of law and civil liberties.”

“I understand that we have been stricken out of the Millennium Challenge. Well, good, I welcome it,” said Duterte.”We can survive without American money,” he added.

“But you know, America, you might also be put to notice. Prepare to leave the Philippines, prepare for the eventual repeal or the abrogation of the Visiting Forces Agreement,” he said, referring to a 1998 deal over US forces visiting the Philippines for joint combat exercises.

Meanwhile, the aid agency has announced that it will continue to monitor events and the human rights situation in the Philippines before deciding on the aid package.

According to official police figures, over 2,500 have been killed during Duterte’s drug crackdown, which began when he took office in June.

Civil rights campaigners have criticized Philippine police operations amid concerns that some of the dead suspects may have been summarily executed by law enforcement officers.

Duterte has dismissed the criticism of his drug crackdown, threatening to pull the Philippines out of the United Nations. On September 19 he said that he needs six more months for his ongoing war on drugs, adding that there are too many people involved in the narcotic trade and that he “cannot kill them all.”

Philippines, Rodrigo Duterte, US, US troops in region December 18, 2016
Iran urges Assad to be vigilant in protecting Aleppo: MP
Amano: Iran faithful to its JCPOA commitments