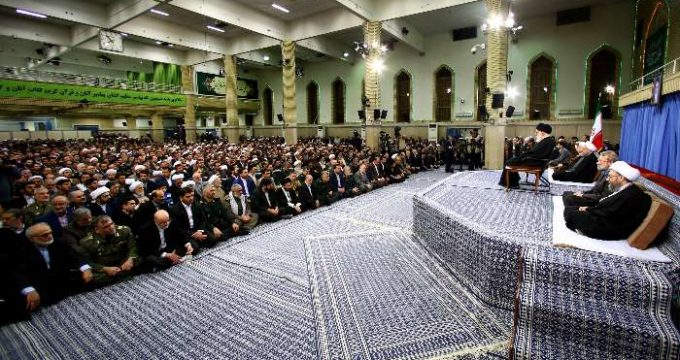 IRNA – Supreme Leader of the Islamic Revolution Ayatollah Seyed Ali Khamenei said that policies and measures of Britons in the past two centuries have been source of misfortune and mishap for regional nations.

‘Over recent days, Britons most impudently called the oppressed and dear Iran as a threat to the region; however, all do know pretty well that contrary to such allegations, those are the Britons who have always been the source of threat, corruption, danger and nastiness,’ said Ayatollah Khamenei in an address to Iranian officials, the guests of the 30th Islamic Unity Conference, ambassadors of Islamic countries to Tehran and people from various walks of life.

The paramount leader said, ‘Today, two wills are conflicting with each other in the region: The will for unity and the will for discord. Under such sensitive conditions, reliance on Quran and divine teachings of the Great Prophet of Islam (PBUH), as a unifying element, is the solution to the sufferings of the world of Islam.’

While congratulating the audience on the auspicious birth anniversary of Prophet Mohammad (PBUH) and of his grandson, Imam Jaafar Sadiq (AS), the Supreme Leader said the holy Prophet of Islam is so important that God Almighty says in the Holy Quran that mankind is indebted for being bestowed with such a unique blessing.

The Supreme Leader referred to the teachings of the Holy Prophet of Islam (PBUH) as a way through which mankind can be be saved.

‘Enemies of mankind and owners of wealth and force oppose such inspiring teachins and due to the same reason, God orders Prophet (PBUH) to avoid following and compromising the pagans and hypocrites, waging Jihad ag
against them and being tough with them.’

The Supreme Leader said Jihad against enemies of Islam and humanity will of course be in proportion with various conditions, sometimes military, sometimes political and sometimes cultural or even scientific. ‘Muslim nations, especially religious preachers and the youth should study and identity divine teachings given to the last Prophet, while benefiting from such reviving collection.’

Also referring to growing efforts of the world arrogance and colonialist powers to divide and weaken Muslims, Ayatollah Khamenei said the world of Islam today suffers abundant calamities and sufferings. ‘The breakthrough to such problems and calamities is unity, cooperation and collaboration and overcoming religious and intellectual differences in light of enormous Islamic commonalities.’

Ayatollah Khamenei said through unity of Islamic governments and nations, Americans and Zionists will lose the potential to dictate their wishes on Muslims and the conspiracy of putting Palestine into oblivion will be foiled.

The Supreme Leader described attack on and massacre of Muslims in Myanmar in east of Asia up to Nigeria in West Africa and Muslims’ confrontation in the highly important west Asian region as the results of the dividing plots of the hegemonic powers and said under such conditions, so called Shias inspired by London and so called Sunnis inspired by Washington are busy igniting fire and sowing discord; they are like two blades of a scissor.

While pointing to confrontation of the ‘satanic’ will of division with the ‘dignity affording’ will of unity, Ayatollah Khamenei said the old policy of Britons called divide and rule is seriously on the agenda of the enemies of Islam.

Ayatollah Khamenei also pointed to h growing anti-Islamic activities of the arrogant powers after triumph of the Islamic Revolution of Iran and said the activities are sign of their fear of the establishment of a powerful, progressive and exemplary Islamic state.

He added that even if claiming leniency and adorned appearance, enemies are in essence the outspoken example of savagery and toughness and nations should be prepared to face such immoral, irreligious and unfair enemies.

Also citing unity as the most important mechanism needed for preparedness of the world of Islam, Ayatollah Khamenei said all Islamic groups, either Shia or Sunni, should avoid differences and regard the nice being of the Holy Prophet (PBUH), holy Quran and noble Mecca as the axes of unity and solidarity.

He then called for vigilance of people and governments against mischiefs of the domineering powers and asked, ‘Why do certain countries with Islamic appearance accept claims of enemies regarding threats and internal enmity of the Islamic world and explicitly follow their policies?’

To the end of his remarks, Ayatollah Khamenei highlighted that continuing to tread the most honorable path of the late Imam Khomeini and of the Islamic Revolution, resistance against enemies and absolute defense for right and righteousness will undoubtedly bring about dignity and prosperity both in this world and the world hereafter.

Prior to the Supreme Leader’s remarks, President Hassan Rouhani congratulated the audience on the birth anniversary of the Prophet (PBUH) and called the day as the day of invitation to the right and all moral virtues.

The president underlined growing financial and spiritual progress and said the youth today are more inclined towards spirituality and the ground has been further prepared for their presence in the spiritual domains more than ever.

He said the report of the Central Bank of Iran (CBI) puts Iran’s economic growth rate in the first half (March 20-December 20) of this fiscal year at 7.4 percent.

On regional conditions, Rouhani said certain groups rongly representing themselves as the holy Prophet (PBUH) and tarnish image of the religion by terrorist and violent acts.

‘The Islamic Republic of Iran will keep siding the oppressed nations of the region against terrorism.’

He criticized certain Muslim governments which have voiced concern and unhappiness with success of the people and armies in Iraq and Syria in fighting terrorism and said, ‘Unfortunately, certain Islamic governments instead of being concerned with the oppressed people of Syria, women and children, the injured and bewildered people in Aleppo, are worried with the fate of terrorists and try to bring them out of Aleppo safely.’

The president said the path of the holy Prophet (PBUH) is in favor of campaign against tyranny and aggression and Muslim countries’ looking outside will prevent them from dignity and progress and the only way for salvation of Islamic countries is convergence and unity.